Human (Original Ace), Hologram (Other Ace and numerous other versions)

"Smoke me a kipper, I'll be back for breakfast".
- Ace's famous catchphrase ("Dimension Jump")

Arnold "Ace" Judas Rimmer was a heroic and dashing test pilot in the Space Corps on Mimas. He's an alternate dimension counterpart of Arnold J. Rimmer.

Ace's life was identical to Arnold Rimmer's up until one year in his school, Io House, when he was seven. Due to being the worst student in class, Ace was held back a year, whereas Rimmer moved up. Due to the humiliation of being a clear foot taller than his classmates, Ace began to buckle down and fight back. He became popular among his peers, who gave him his nickname, and his parents began to show him love.

A test pilot in the Space Corps, based on Mimas, Ace was given the ship Wildfire and with it the opportunity to test a ship capable of jumping between dimensions. Even though this meant Ace would never be able to return to his own reality, he accepted.

The first dimension he arrived in, he met the worst version of himself he would ever find — the "piece of human wreckage", Arnold Rimmer. After colliding with Starbug, Ace helped Dave Lister (whom he nicknamed 'Skipper') fix the engines and return to their Red Dwarf, despite having a broken arm. While Rimmer was blatant in his dislike of Ace, the test pilot was civil in return, and only voiced his dislike when with Lister. He learnt the single difference between himself and Rimmer, and decided his own being held back at school was the 'lucky break' Rimmer always complained he'd never had. Aware he couldn't return to his own dimension, Ace left to explore the other realities and meet more versions of himself. ("Dimension Jump").

In one reality, Ace saved the Princess Holina from two Felis sapiens. He then dimension jumped to another reality, where he met a female crew of Red Dwarf. Deb Lister seduced Ace, and they slept together, intending to get him pregnant. Deb soon found that instead of Ace getting pregnant, she had become pregnant instead. Ace left in his ship for new adventures. (Ace Rimmer Space Adventurer)

He had multiple adventures until he arrived in dimension 165, where his life was cut short — catching "the business end of a Neutron Tank". He passed the mantle onto another Rimmer, passing on the words "The Universe needs an Ace."

Subsequent Aces passed the mantle onto other Rimmers until it reached the one before our Rimmer, in a deleted scene from "Stoke me a Clipper". This version of Ace originated from a universe that diverged from the episode "Out of Time". Here, he stole the time drive and left the others for dead, ending up in Napoleonic times when conscription was introduced. To avoid fighting, he wore a dress and wig, and worked in a flower shop.

After being captured by the Nazi Captain Voorhese, under unspecified circumstances ("Stoke Me a Clipper"), Ace escaped his bonds by dislocating both shoulders and popping them behind his ears. He confronted his captors in the cockpit of an aircraft and killed the pilot. He was then attacked by an alligator being thrown at him.

Whilst fighting it off, he managed to roll out of the plane before a bomb went off, air-sailing it towards the Commander whom threw the alligator at him. Upon stealing the Commander's parachute, he landed on a space bike, hidden in a shed, and rescued Princess Bonjella from a firing squad - before rocketing the bike into the air and escaping.

The hologram Ace arrived in the universe of the Starbug crew and revealed to Arnold Rimmer that he, himself, was a hard-light hologram, and that he was dying. Although he was "hard-light", his Light Bee had been hit on the Nazi world.

Before dying, this Ace asked the Rimmer aboard Starbug to take on the mantle. Rimmer was reluctant at first as he didn't want to be the smug, self-satisfied version of himself that he had always despised, but after some teasing from Lister that he could never do it, Rimmer was finally convinced. Ace then passed away. The Red Dwarf Rimmer finally became Ace, letting Kryten and Cat think that "Arnold Rimmer" had died on the pretense of it being the real Rimmer, and holding a funeral for him.

They ejected Ace's Light Bee coffin and Starbug followed it on its planned course through a Wormhole. Ace had told Rimmer to follow it, as what he would find there would convince him to also become Ace.

It settled into orbit around a planet, where it joined the billions of other Light Bee coffins that contained all other versions of Rimmer who had gone on to become Ace and save universes ultimately had their light bees go there. There were so many coffins they make up the rings of the planet. Lister asked Rimmer if he would be the one to break the chain. Rimmer then said his goodbyes to his fellow Dwarfers and departed from Starbug to begin his new life. ("Stoke Me a Clipper")

"He's a me who had all the luck, all the chances, all the breaks that I never got."
- Rimmer expressing his dislike for Ace ("Dimension Jump")

Unlike the regular Rimmer, Ace is brave, smart, confident, charming, and modest. He has a taste for adventure, and greatly admires "Spanners" Lister, with whom he is close friends. Ace frequently praises and appreciates people around him, is always modest about his own achievements and often downplays them. He is charismatic and popular with everyone he meets and is said to enjoy a multi partnered sex life. Whenever he meets someone, they often exclaim in awe "What a guy". He frequently refers to people as "old..." using a fruit or vegetable as an affectionate greeting. It is unknown how his hair is thick, blond, and pliable in contrast to Rimmer's wiry mop, but may be a by-product of how changes in the time/space continuum are altered where Ace's history changed from Rimmer's. Ace wears his hair in a permanent quiff.

Ace wears a gold reflective flight jacket, debonair white scarf, and a gold biker's helmet in his spacecraft, Wildfire (a cool contrast to Rimmer's bike helmet he wears while using his exercise bike). He also tops the look off with a pair of dark shades, and often a cigar.

Having a fearless taste for adventure, and a self-less drive to take on challenges that benefit others, Ace enjoys exploring dimensions. He always defends and aids his friends whenever they need him, and never puts himself first. Unlike his counterpart, Ace is liked, admired, and praised by his friends and colleagues, and loved by his many female admirers. At the end of the novel 'Backwards,' eight-year-old Ace deliberately lets a younger boy beat him in a race so that he would feel better about himself.

Although Ace is friendly to everyone he meets, he does seem to resent and widely dislike Rimmer and is upset to find him to be "a warped, bitter, weasely maggot". Likewise, Rimmer is repulsed and jealous of Ace, seeing him as living proof of what he could have had if he was given the breaks and chances, referring to him as smug and self-satisfied and mocks his friendship with Lister. Lister however feels no such jealously of hearing about Spanners, Ace's friend, instead pleased that that version of himself leads a good life.

Ace is a superb pilot, and masterful at hand-to-hand combat, marksmanship, medicine, welding, Space Corp Special Service, and he can teach the piano. On Mimas, he was invited for twenty one gun salutes, and dinner with the admiral. He turned down the latter to spend time with Tommy, a (then) very unwell little boy whom he nursed back to health; according to the Padre, Ace sat by Tommy's bedside "day after day, night after night, holding his hand, reading him stories".

As shown in the episode "Stoke Me a Clipper", billions of Ace Rimmers have existed in the multiverse, having taken up the mantle owned by the first Ace, with many being holograms. It is shown that after they die their light bees, or remains, are sent through a wormhole to a universe to surround a planet.

When an Emohawk attacks Rimmer, it changes him to be a perfect double of Ace. To save Lister and Kryten, he plans open an airlock to suck the emohawk into space, this would have resulted in sacrificing himself and Cat, but Ace isn't against the idea, saying his life is a small price to pay, and he'll give the Cat a swift mercy-kill. Lister and Kryten prevent this from happening, and Ace leads the hunt for the emohawk.

The emohawk transforms into a grenade, and, once again, Ace selflessly saves everyone's lives, diving onto it before it explodes and smothering the blast with his hard-light hologram. After being asked by Kryten, he admits he didn't know the grenade wouldn't damage him, that he was just trying to save them.

Two alternate versions of Ace also existed somewhere in the Multiverse, and both had a similar history to the original Ace. However one Ace used the Wildfire ship too soon before any dangers were fully realised, causing him to die once he reached a dimension basically identical to his own, described in hindsight as the result of the friction caused by travelling between two dimensions so fundamentally similar. Due to the nature of his appearance the Ace of this dimension, along with everyone else, believed the ship broke the time barrier and was a future version of Ace. However, Spanners quickly discovered that this was a mistake based on the date on the video record of the flight, as well as the alternate Ace still possessing a medal and lacking a black eye that Ace had lost and received in a recent fight. As a result, the data from the alternate Wildfire allowed Ace to safely leave his dimension by pushing the ship further to reduce the 'friction' that had killed his counterpart.

Ace found himself in the dimension shown in the novel Backwards and soon encountered the Red Dwarf crew after they left the backwards universe. Ace was disappointed with Rimmer, who was cowardly and bitter, but Ace found himself liking the fifteen-year-old Lister, who from his perspective was an alternate version of Spanners and was de-aged into a teenager due to the flow of time on the backwards Earth. This Ace was killed sacrificing his life to save Lister from an Agonoid. His ship was taken by Lister and the Cat after the death of Rimmer and Kryten due to there being nothing left for them in their universe. They were taken to a universe where they had died playing Better Than Life as a result. 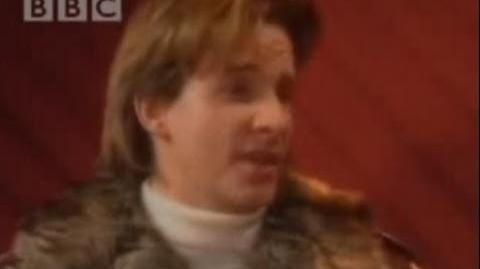 What a Guy! Red Dwarf - BBC 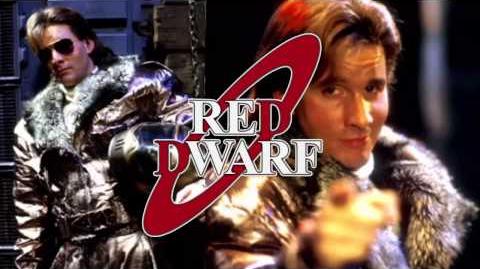 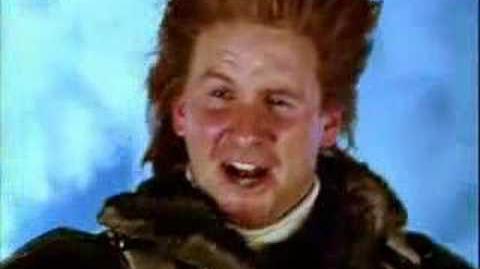 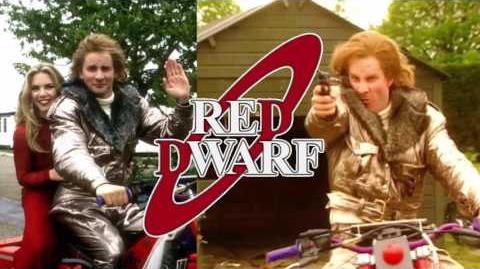