The Aigburth Arms is a real-life public house in south Liverpool, England, important to the Red Dwarf franchise as the birthplace of Grant Naylor Productions and the concept of Red Dwarf in the early 1980s. It was renamed The Victoria in 2008 as part of a refurbishment, but resumed its original name in 2020.

A fictionalised version of the Aigburth Arms of the 22nd century is important to both the Red Dwarf novels and television series, as the place where Dave Lister, the last human in the universe, was found as a baby under a pool table in a box, and also spent much of his adult life before joining the crew of Red Dwarf.

An early script of the television series reveals that The Aigburth Arms will change its name at some point in the next few centuries to "The Flag and Lettuce", but it is still referred to by locals, and Lister, as the Aigburth Arms, and is described as being a "back-alley Scouse drinking pit" like in the novels. In the novels it is referred to as both.

The real-life Aigburth Arms has also since changed its name, in the ensuing decades since the 1980s, and was known as ""The Victoria" until it became The Aigburth Arms once again in 2020.

The Aigburth Arms is first featured in the "lost episode" of Series III, "Dad", where it referred to as the "Flag and Lettuce". Lister was left here in a box when he was a baby, and Lister later goes back in time and seeks out his father there. Given the later events of the television series "canon", the episode "Dad" appears redundant.

In the broadcast series, Lister first mentioned that he was found in a box, under a pool table in a public house, as the crew got drunk when throwing a leaving party for the soon-to be-replaced Kryten. Arnold Rimmer postulated that Lister was the unwanted result of incest, between brother and sister, joking he had ten toes on each foot and probably has webbed feet, due to his mysterious origins. ("The Last Day")

The Aigburth Arms is mentioned as the favourite drinking haunt of an adult Dave Lister before he joined the Space Corps; a place where Kryten stated as being a place where humans would "achieve advanced states of mental incompetence by repeated drinking of fermented vegetable drinks." Lister was a legend on the "gravity pool table" there. ("White Hole")

Lister once said to Rimmer that the pub was named the "Flag and Lettuce" in his century, and that he was found as a baby under the pool table in a box in 2155, growing up never knowing who his parents were. He spent most of his life "drifting" and so much time at the Aigburth Arms because he never knew his roots. ("Dad") ("Ouroboros")

As an adult, Lister was a regular at the Aigburth Arms, playing on the pool table every Friday night. He told the Dwarfers that he was known as "Cinzano Bianco", because once he was on the table, he couldn't be got rid of. ("White Hole")

Lister once claimed that he had one night when he had been unbeatable on the Aigburth Arms pool table. Every shot he had tried had succeeded, but he never played again because he knew that it had been a fluke. This had apparently made him a legend at the Aigburth Arms. (Infinity Welcomes Careful Drivers, Better Than Life)

In around 2172, a 17-year-old Lister and his band, Smeg and the Heads, would play here and sell CDs of the "Om song" in the car park from the back of Dobbin's car. Lister in his mid-twenties went back to the pub using the time-slides and successfully convinced his younger self to become the inventor of the Tension Sheet instead of Thickie Holden. This meant that Lister became a billionaire and never joined Red Dwarf, but Rimmer tried to do the same for himself and unwittingly undid everything, setting the timeline back to normal. ("Timeslides")

In the year 2155, a six week old Lister had been placed in a cardboard box which had the word OUROBOROS written on it under the pool table. When Frank, one of the pub's customers, came into the bar area, he heard the baby's cries from under the grav-pool table and picked up the box. He showed the baby to the barmaid and remarked that there was no note, just the word on the side of the box, which she took for "Our Rob or Ross" misspelt. It was later revealed that the baby had been left there by his father, who was Lister, making him essentially a clone of himself, as part of a plan to prevent the human race from becoming extinct. ("Ouroboros").

A never-filmed scene in "The Flag and Lettuce" from "Dad"

A 17-year-old Lister with his band Smeg and the Heads perform a gig at the Aigburth Arms c.2172 ("Timeslides")

Lister and the Cat travel back in time to the Aigburth Arms c.2172 ("Timeslides")

After a brilliant red flash, a six-week old Lister is left in a box under the Grav-Pool table

Frank finds the baby Lister under the Grav-Pool table

Calling on the Aigburth Arms barmaid

They muse over "Our Rob or Ross"

Frank at the Aigburth Arms bar

"For a long time, you'll think you were abandoned. But you weren't, man..."

"With is going round and round in time, the human race can never become extinct. We're kind of like, a holding pattern. I'll see you, son..."

The Aigburth Arms was named after a real-life pub that Rob Grant and Doug Naylor frequented in Aigburth, south Liverpool, in the early 1980s. It was later known as "The Victoria" before it closed. This the pub where Rob Grant and Doug Naylor concocted their idea for a sci-fi sit-com, scribbling its details down on a beermat. As of 2020, the empty Victoria has been renovated, and it would later open for business in late 2020 after its grand opening was delayed due to coronavirus. Liverpudlian fans of Red Dwarf have joked that, with the pub now re-opened under its original name, the timeline of Red Dwarf has now been 'restored'. Yelp Review

As "the birthplace of Red Dwarf and Lister", a commemorative plaque was laid there by the cast and writers in April 2009. article The event was both a party and charity event to coincide with the launching of Back to Earth on the channel Dave and over eighty Red Dwarf fans turned up. Events included a "Planet potting" pool battle, Dave Lister curry club, a Red Dwarf quiz, fancy dress competition, and a charity raffle in aid of the James Bulger Red Balloon Appeal. article

The Boys from the Dwarf at the pub 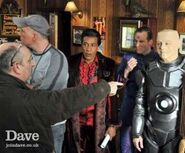