A Bazookoid is a directed energy mining gun used by mining colonies operated by the Jupiter Mining Corporation and intended to blow apart rocks and ores.

Bazookoids are standard equipment on mining freighters like Red Dwarf and they look a lot like portable missile launchers therefore named after "bazookas". They have to be "cocked", which recharges the blast.

Bazookoids come in both a rifle-type and handgun-type configuration (Mk.I and Mk.II), and are able to be switched between firing either laser blasts (amplified electromagnetic light) and plasma blasts (super-heated, ionized gas).

Three million years later, the Boys from the Dwarf would often use them as both defensive and offensive weapons, both in the novels and the television series.

The Boys from the Dwarf often use bazookoids as offensive and defensive weapons against various enemies such as GELFs and simulants. However, to repeated dismay of the Dwarfers, a great number of threats can withstand bazookoid blasts; this includes such as the Mutton Vindaloo Beast, the Unspeakable One, Hudzen-10, Simulants, and some GELFs (Psirens and Kinitawowi will only be stunned if shot), and Asclepius.

Bazookoids made their first appearance in the Series III episode "Polymorph", where the Dwarfers hunted down the shape-shifting polymorph in the Red Dwarf cargo bays. The bazookoids have some form of computer-assisted targeted and aiming, and that the blasts can be made to be heat-seeking (although it is unclear if this is a standard feature of the bazookoids or if they have been modified by Kryten). Some of the energy blasts unfortunately chased after Cat, targeting his body heat (leaving Kryten and Rimmer alone as they are mechanical and hologrammatic respectively), but Cat was able to perform some extraordinary feats of acrobatics and quick thinking to avoid being blasted before sealing the energy bolts into an airlock. Some time later, these energy bolts were accidentally released, but fortunately they exploded the unaware polymorph as it prepared to strike the Dwarfers.

In "The Last Day", bazookoids have a red 'dismantler' button which makes the device instantly fall apart, and which Dave Lister accidentally pressed when facing down Hudzen-10. With a double-barreled shotgun also proving ineffective against Hudzen-10, Kryten was forced to get creative in defeating him.

In "Identity Within" (a 'lost episode' reconstructed on the Series VII DVD), Cat attempts to free Ora from a cage on the Brefewino planet. The bazookoid charges do not destroy the Orodite bars, which grow stronger with every blast. However Ora teaches Cat how to connect leads from the back of the bazookoid to the bars, puts it on fast charge and reverses the flow of energy. This causes the bazookoid to grow white-hot and explode, but also does the same to the bars, freeing Ora.

There is also another smaller laser gun, much like a small rifle or large pistol, that is used by the crew. Bazookoids, as shown in "Stoke Me a Clipper", can fire both live and dud ammunition. Lister used one of these smaller bazookoids with blanks in his ruse to get Rimmer to act more Ace-like.

Lister used a large bazookoid to blast Starbug free out of the dirt of an asteroid in "Psirens", after a crash landing had embedded the front landing gear in the rock. This is the only occasion in the television series that bazookoids are used for their intended purpose, blasting apart rocks.

Rimmer saved the crew and restored the Time Line by blowing up the Time Drive with a bazookoid in "Out of Time".

The Polymorph explodes on contact with a bolt (Polymorph)

Lister blasts Starbug free from an asteroid with a bazookoid ("Psirens")

The gang hunt for a Psiren in the rear section of Starbug with bazookoids. Lister has one of the smaller variants of bazookoid. ("Psirens")

Rimmer with a bazookoid ("Out of Time")

Rimmer uses the bazookoid to destroy the Time Drive

Rimmer prepares to fire on Asclepius with a bazookoid ("Give & Take")

A prop which was sold after filming 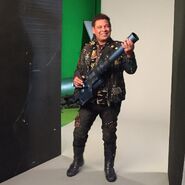 Lister with a bazookoid in a promo for Series XI

Retrieved from "https://reddwarf.fandom.com/wiki/Bazookoid?oldid=33059"
Community content is available under CC-BY-SA unless otherwise noted.