Blue Midget is the most abundant type of shuttle in the shuttle bays aboard the city-sized JMC mining spaceship Red Dwarf. The Blue Midgets are relatively small in size, and the Starbug and White Giant shuttlecraft are larger. There have been four different sub-types of Blue Midget in the television series.

The original version of Blue Midget was depicted by a physical model and first appeared in the first episode of Series II, as the shuttle which takes the boys from the Dwarf to the wreck of Nova 5 where they rescue Kryten (then a guest star). This was the first of the Red Dwarf shuttles used, and remains the only shuttle used throughout Series II.

The fuselage of the original Blue Midget resembles that of a Chinook helicopter, and the overall chassis and interior also has elements of a bathyscaphe, a tank and/or a truck. Inside, it is not much larger than a truck cab, and its cockpit can hold a maximum of three people, at least in the original versions of the shuttle. Customisations include furry dice inside the cockpit, and on the back a bumper sticker that reads "My Other Space Ship is a Red Dwarf".

The engine was mostly exposed on either side, with two huge exhaust pies coming out of it over the top. It had very small maneuvering thrusters on either side, and one large rocket booster on the back end for propulsion. For "landing mode" it has caterpillar tracks that can tackle almost any extraterrestrial terrain.

By Series III, and the introduction of Kryten as a main character, a bigger shuttle - Starbug - was created, and Blue Midget faded into the background, only featuring in two episodes of Series III and not showing up at all again until Series VIII.

For "Red Dwarf Remastered", the decision was taken to redesign the Blue Midget for much the same reasons as Red Dwarf was redesigned, those being that the creators had never been too happy with the original design and the progression of model making in the intermediary time between projects. The new design resembled that of a bubble car with a hint of Starbug, and featured two engines at the back rather than the one of the original model. This design featured retractable "legs" - identical to that of the hoppers described in the novels, which were used for taking off and walking (replacing the caterpillar tracks of the original model). As with the new, longer, Red Dwarf model, this design was also utilised for Series VIII, and again, as with the new Red Dwarf design, the physical model - though built - was never used during production. The difference in budget and time, as well as the progression of CGI did however allow a slightly improved render of the craft in Series VIII.

For Series VIII, without Remastered's constraint of having to use original Series II interior footage, a substantially larger cockpit was designed for Blue Midget, more akin to the Series VI–VII Starbug cockpit; the redesign was ascribed to the nanobots and their reconstruction of Red Dwarf and the Blue Midgets. These Blue Midgets apparently had artificial intelligence, since they were able to copy Cat as he danced in Back in the Red although this did take place in a VR simulation. These Blue Midgets were significantly larger inside, big enough to hold Lister, Rimmer, Cat, Kryten, Kochanski, and two skutters in the cockpit, each with their own consoles.

All of the Blue Midget craft were supposedly used by the Red Dwarf crew to abandon the mothership in "Only the Good...", however in "Back to Earth, Part Three" it is revealed that, during the 1999 - 2009 Bridge, Kochanski flew one to get away from Red Dwarf and an increasingly unstable Lister.

Blue Midget is the most frequently used shuttle in Series X, with Starbug only being used once in "Trojan" and only as an exterior model shot. Blue Midget is depicted in Series X using the model originally commissioned by the BBC and Grant Naylor Productions for use in the Remastered project before that project was forced to switch to Chris Veale CGI for budgetary reasons. Two sets were made to depict the interior (actually re-jigged sets for the Series X Drive Room). Blue Midget is used first to get the crew to the BEGG moon and the ERRA space station in "Entangled" and then later used to escape from and then do battle with a Simulant Death Ship in the series finale episode "The Beginning".

The interior of the Series X Blue Midgets seems to be a fusion of the two earlier types, and of an intermediate size between the two - larger that the original version, but smaller than the Remastered updated version, though keeping the same general layout as Series VIII - it's possible that this is more due to well documented production issues rather than any design choice - with a cockpit able to hold four. There is also a single room in the rear, unlike in other Blue Midgets where only the cockpit is seen.

The exterior remains roughly the same as the Remastered and VIII CGI model for which it was reference, however the legs and arms go unused entirely.

In Series XI, the Dwarfers go back to using Starbug as their primary shuttle, and Blue Midget is not used (this is a reversal of Series X, where Starbug was only used in a single brief exterior shot, and the crew only used Blue Midget for the series). The Starbugs used in Series XI seem to be a newer model, and although green on the outside have blue-tinged lighting and digital displays similar to Blue Midget.

Blue Midget was used as the background for the Red Dwarf Series II DVD cover, and it appears on the back of the Series X DVD and Bluray outside covers.

Blue Midget also features in the first two Red Dwarf novels. In the second novel, Better Than Life, after a polymorph finds its way aboard the shuttle craft, the craft is made to self-destruct at the insistence of Lister. 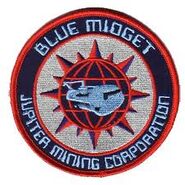 Rimmer and Lister in a Blue Midget ("Kryten")

Going back to Red Dwarf

The Dwarfers in Blue Midget after rescuing Kryten

The Blue Midget cockpit with furry dice, Black Box on the left and Holly on the right

The boys, drunk in the Blue Midget cockpit after Rimmer's Deathday party ("Thanks for the Memory", Series II)

Blue Midget takes off from the Deathday planetoid

Appearances of Blue Midget in Red Dwarf Remastered were a hybrid with the hoppers, with "legs"

Cat does some synchronised dancing with a Blue Midget (Back in the Red, Series VIII)