Boys from the Dwarf

The Boys from the Dwarf, also referred to as The Posse or The Dwarfers were terms used by Dave Lister to name the survivors of the JMC mining ship Red Dwarf after he was revived from stasis, three million years after the accident that killed most of the crew.

The dysfunctional crew are comprised of the slobbish Lister (the last human being alive); Cat (who evolved from Lister's cat); the senile computer Holly which barely runs the ship (although for some time, Holly was in fact, a female); and, begrudgingly the hologram of Lister's hated dead bunkmate, Arnold J. Rimmer. From Series II, the neurotic mechanoid Kryten joins them. These four make up the main characters of the franchise.

Lister considered the Skutters as part of the Boys From The Dwarf, but Rimmer did not share this view.

In the Series III episode "Polymorph", after an encounter with an emotion stealing polymorph, the pacifistic Rimmer suggest that they call themselves the "Committee for the Liberation and Integration of Terrifying Organisms and their Rehabilitation Into Society." The only downside, he noted, was that the abbreviation is C.L.I.T.O.R.I.S.

The Boys from the Dwarf had a special salute, which consisted in having both hands extended with fingers pointing downward and shaking them while exclaiming "Boys from the Dwarf!" ("Backwards", "Quarantine", "Demons & Angels", "Cured", "Siliconia")

Later, the hologram version of Rimmer left to become the next incarnation of his alter-ego from other dimensions Ace Rimmer. Soon after, an alternate version of Kristine Kochanski, a member of the dead Red Dwarf crew, joined the crew after a series of accidents. Even when the rest of the crew were resurrected by nanobots, the Boys from the Dwarf remained in alliance, rejoined by the resurrected form of Arnold Rimmer.

Following the 1999 - 2009 bridge, the Boys are trimmed back down to how they last were in Series VI: Cat, Kryten, Rimmer (now a hard-light hologram again who appears to share the original Rimmer hologram's memories), and Lister. Kochanski had left the ship and Holly was offline due to water damage caused by Lister's carelessness (the rest of the Red Dwarf crew still being away on a fleet of Starbug and Blue Midget craft).

Although originally used by Dave Lister in many episodes, such as RD: Quarantine, the term Boys from the Dwarf is often used by Dwarfers to refer to the main characters of the series. The term Dwarfer is also sometimes used in this sense, although Dwarfer is the term tended to be given to the fan base of Red Dwarf.

The gang in the Drive Room with the control box for the Holly Hop Drive ("Parallel Universe", Series II) 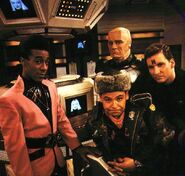 In Series VIII as Canaries

The Back to Earth Boys, again without Kochanski and Holly

The special salute done by Lister (The Promised Land)