Tongue Tied
Register
Don't have an account?
Sign In
Advertisement
in: Spaceships, The Cat, Technology,
and 2 more

Cat Arks were two shuttles built (or modified from existing shuttles) aboard the massive spacecraft Red Dwarf by the Felis sapiens who had evolved on the ship from their progenitor Frankenstein three million years earlier.

Almost the whole species left Red Dwarf aboard the Cat Arks, a decade or so before the last human, Dave Lister, came out of stasis. Lister emerged to find only one of them (and an old blind Cat Priest) still aboard Red Dwarf.

After the breaking of the Cat Commandments and their "holy wars" which had consumed the species, the survivors took the two arks and left, leaving behind only the Cat Priest, The Idiot and The Cripple in Supply Pipe 28. The latter two would eventually have their own child, the last of the species aboard Red Dwarf and perhaps the last of the species in entirety, became to known simply as Cat. (Infinity Welcomes Careful Drivers, Red Dwarf Smegazine)

As for the Arks, they followed the divine plan of Cloister the Stupid (actually one of Dave Lister's old laundry lists) looking for Fuchal and one of them, the blue Ark, flew straight into an asteroid, blowing up. The other one, the red Ark, flew onward assured of their righteousness. ("Waiting for God")

The Felis sapiens' holy book. Note one of the Cat Arks smashing into an asteroid. ("Waiting for God", Series I)

Artwork for Red Dwarf Remastered. Note one of the Cat Arks smashing into an asteroid. 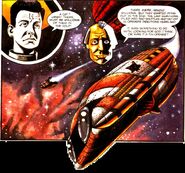 Before the television movie The Promised Land, it was unknown what had become of the surviving Ark, although there were hints that those cats survived.

It is likely that the remaining Ark may have survived to set up a colony somewhere in Deep Space, since the Felis sapiens species was recognized by Binks of the Holoship Enlightenment, who noted correctly that they were descended from common house cats, about half as smart, and of no further use as study, so the Holoship must have encountered and studied them before. Others were also familiar with the species, such as and the rogue mechanoid Hudzen-10, who recognised the species and so must have encountered them in his Diva-Droid Shuttle whilst tracking Red Dwarf, and he didn't consider them human and therefore a "viable target".

This idea was explored in the "lost episode" of Series VII, "Identity Within", where more Felis sapiens are discovered who had apparently survived by adopting a military structure, likely as they were preyed upon as snacks and slave labour by Brefewino. Zural was platoon commander, and Ora Panzil his lieutenant, who later becomes Cat's mate.

"Identity Within" was unproduced and later recreated using the storyboards and the voice talents of Chris Barrie. It was included on the Series VII DVD. However, the events of "Identity Within" have since been declared non-canon.

In the Series XI episode "Can of Worms", Cat met and mated with a female of his species, Ankita, who the boys from the Dwarf rescued from the Mercenoid transport ship. However, Ankita was not all that she seemed.

What became of the remaining Ark is unknown, but the surviving Cats came to reside aboard a new fleet of starships. Over three decades later, Red Dwarf eventually came across the surviving Felis sapiens aboard this Cat Fleet, and which had since come under the control of the dictator Rodon and his Feral Cats.