Tongue Tied
Register
Don't have an account?
Sign In
Advertisement
in: Real People, Behind the Scenes, Series I,
and 13 more

Doug Naylor, along with Rob Grant, is one of the two co-creators of Red Dwarf. The writing collaborations between Grant and Naylor have often used the pseudonym Grant Naylor, and the company they founded is named Grant Naylor Productions.

Although Rob Grant ended his involvement with Red Dwarf in the mid-1990s, Doug Naylor has continued to write, produce and on occasion direct the television series. From Series X onwards, his son Richard Naylor has also been an executive producer.

Doug Naylor was born in Manchester, England and studied at the University of Liverpool. In the mid-1980s, Naylor wrote two regular science-fiction comedy sketch shows for BBC Radio 4 entitled Son of Cliché and Dave Hollins: Space Cadet. These sketch shows were scripted by Naylor along with Grant. This writing partnership was successful with Naylor and Grant going on to co-write and produce numerous BBC television series throughout the 1980's and 1990's. These included programmes such as Spitting Image, The 10 Percenters, and various Jasper Carrott projects.

However sometime between the airing of Series VI, and the writing of the Series VII, Grant ended his partnership with Naylor after revealing he was tired of it and of his intentions to quit and pursue other projects. The pair announced their professional split and cited creative and professional differences, along with Grant's desire to move onto new shows.

With this split it appeared as though Red Dwarf was finished; other obstacles included the fact that Chris Barrie was tied up starring in the Brittas Empire and the other star of Red Dwarf, Craig Charles, was in prison. However when Charles was exonerated and Barrie became available for a few episodes, Series VII finally went ahead. Doug Naylor went on to write Series VII and Series VIII mostly on his own, but some episodes were co-written with such writers as Paul Alexander and Kim Fuller, and there was even an episode co-written with one of the cast members, Robert Llewellyn.

Over much of the 2000s, Naylor and Grant Naylor Productions were primarily focused on the production of the DVD releases of Red Dwarf and the postulated and much-hoped-for movie, which was supposedly to be written by Naylor alone. In the end, this dry spell ended with 2009's Back to Earth specials on Dave, again written by Naylor solely, followed by a full six episode return Series X in 2012. For both BtE and Series X, Naylor has also taken up directing as well, releasing a special director's cut with commentary for Back to Earth. 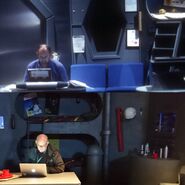 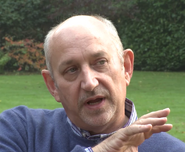 Doug Naylor being interviewed in a 2012 episode of Fully Charged