View source
watch 01:25
Jurassic World: Dominion Dominates Fandom Wikis - The Loop
Do you like this video?
Play Sound
This article is about the the common elevators aboard Red Dwarf. Not to be confused with the Xpress Lifts or the train system.

The JMC Elevators, or simply the lifts, are a common system of transport between corridors and decks within the Jupiter Mining Corporation spaceship Red Dwarf. The JMC had its own elevator division to build and install them aboard spaceships.

The elevators of the Red Dwarf come in all shapes and sizes, although they are generally used for relatively short journeys between decks, floors or levels that are relatively close together.

Arnold Rimmer and Yvonne McGruder conceived a child, Michael McGruder, a fact which Arnold did not discover until three million years later. Michael had been conceived after Yvonne had hit her head on a winch and had been suffering from concussion, and Arnold and Yvonne had met in an elevator. (Last Human novel)

When Queeg 500 took over Red Dwarf from Holly, he forced the crew to work for a living. This even included the skutters, who were made by Queeg to fix the fire extinguishers and elevators to working order for the first time. ("Queeg", Series II)

The Dwarfers took a large, open lift down to the cargo bays when searching for the polymorph. ("Polymorph", Series III)

The crew were once forced to go without using the elevators when Red Dwarf was left without power, forcing the Dwarfers to bang down doors using Kryten as a battering ram. ("White Hole", Series IV)

When the nanobot-resurrected Captain Hollister was drugged with the sexual virility drug Boing, one of the side-effects was that he stopped the lift doors from closing. He wasn't even getting a lift. ("Pete I", Series XII)

A hatching dinosaur egg was able to escape up a lift shaft, where it ended up in Hollister's bunk and terrorised him. ("Pete II", Series XII)

Kryten, Rimmer and Cat descend into the cargo bays on a scaffolding lift ("Polymorph")

The restricted Floor 13 being activated on an elevator ("Back in the Red", Series VIII)

An elevator going down to the Tank on Floor 13

The elevators take a much more prominent role in Series XI, where it revealed that a number of the elevators have artificial intelligence in a manner similar to the vending machines of Red Dwarf.

Rimmer gets into an argument with an elevator, Shaft 14, accusing it of being too slow and he orders one of the skutters to demote it by installing the lift into a grungier part of the ship. Rimmer was unaware that his future self was in the lift, who promised to place it in a nicer part of the ship instead. Three weeks later, after Rimmer had forgotten, he entered Shaft 14 decides to get revenge on Rimmer. Since Snacky had installed a nuclear reactor to the lifts counterweight, it can travel near the speed of light, and tests it by taking Rimmer at light speed around the ship. ("Give & Take")

When Rimmer found himself made an officer, he had a luxurious elevator made out for himself, whilst forcing the others to take a dilapidated and uncomfortable "grunts" lift. ("Officer Rimmer")

When Kryten had a mid-life crisis, one of his symptoms was that he took up a love of extreme sports, which including bungee jumping in the elevator shafts. ("Krysis")

The six polymorph morphlings meet their very gooey end in an elevator when their parent, the Cat, shoots them, fortunately not shooting his real crewmates next to them. ("Can of Worms")

An elevator shaft as seen in Series XI

The rude AI of the "grunt's lift" (Officer Rimmer)

The gang covered in polymorph goo inside an elevator (Can of Worms, Series XI)

When the various A.I.s of Red Dwarf united and went on strike against the crew, this included the lifts. The machines eventually returned to servicing the crew with the election of of a "Machine President" to advocate for their rights. ("Mechocracy") 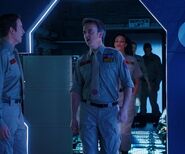 Officer Bradley emerges into White Corridor 159 from a service lift and orders Rimmer back to work ("Skipper", Series XII)