An escape pod is a very small spacecraft, usually only designed for one or two persons, that can be used as a "lifeboat" by a crewmember of a larger spacecraft when they need to flee in emergencies. Most spaceships - including huge vessels such as Red Dwarf, and even smaller shuttles such as Starbug - contained their own escape pods.

An escape pod was somewhat similar to the Red Dwarf garbage pods, which were slightly smaller pods used by Red Dwarf to remove the ship's trash from the Waste Disposal section of the ship. They were around the size of a water or gas tank and looked a lot like one. They probably did not have propulsion and mechanics like most escape pods, and were probably simply fired from Red Dwarf. When Holly picked one up, Arnold Rimmer, not knowing what it was, assumed that it was a craft or escape pod of an alien race he named the "Quagaars". Rimmer thought they had advanced technology and could give him a solid body compared to his soft-light hologram body. Lister soon entered the Observation Room and found out that it was a garbage pod from Red Dwarf waste disposal, but Lister and Holly didn't tell Rimmer as a joke. After Rimmer's self-imposed quarantine period on the pod was over (which Lister didn't follow), Rimmer got Lister to open the pod for him. Lister then pulled out a rotting roast chicken, which Rimmer assumed to be the "perfectly preserved remains of a Quagaar warrior." At the end Rimmer realised, angrily and repeatedly shouting "it's a smegging garbage pod!" ("Waiting for God", Series I)

The shuttle most commonly used by the boys from the Dwarf, Starbug, has a single one man escape pod. The pod first appeared as an egg-shaped red craft very similar to the red ore sample pods, which were in themselves like miniature Red Dwarfs. It was used by Rimmer to return to Red Dwarf from Lanstrom's planet, as his hologram projection light bee was needed for Dr. Hildegard Lanstrom. ("Quarantine", Series V)

When Starbug was locked in a death dive into a lava moon due to the Armageddon Virus, Rimmer suggested that he himself wanted to use the escape pod. Lister informed him that this wasn't possible for any of them, as the escape pod had escaped the previous Thursday when he was drunk and used the escape pod launch lever to open a bottle of beer. ("Gunmen of the Apocalypse", Series VI)

The Starbug escape pod was eventually recaptured, or alternatively had been recreated due to the recent time paradox that had altered and upgraded Starbug. Able used the escape pod, and although the Starbug crew initially thought that Able was defecting to the Simulant Trader on the SS Centauri, Able actually saved them when he used Kryten's Nega-Drive energy on the SS Centauri and caused the Simulant Trader to blow himself up in a fit of despair. The escape pod than crash landed on an asteroid, killing Able. ("Beyond a Joke", Series VII)

It is unknown if the Starbug escape pod was salvaged and repaired. If it was, then it was destroyed when Starbug crashed into the cargo bays in the newly nanobot-recreated Red Dwarf. ("Back in the Red", Series VIII)

When Red Dwarf recovered an adrift cryogenic escape pod from an asteroid field, the black box of the pod revealed its history. Inside was the lone survivor of a riot aboard a prisoner transport vessel containing murderous Simulants, that had originally been destined for the space prison Justice World. However, the Dwarfers could not ascertain from the Black Box exactly who was in the pod - a Simulant Convict, or a female human guard named Barbra Bellini. The pod had lead lining to enable it to survive in space, so the Dwarfers couldn't x-ray it to find out who was inside. The Dwarfers decided it would be safer to go onto Justice World and open the pod there, although this course of action led to its own problems. ("Justice", Series IV)

After a Starbug was destroyed and Kryten was left damaged and immobile during a moon-quake, he was able to detach a hand and send it off to get help from the other boys from the Dwarf. For this purpose, Kryten's hand used an mining ore sample pod as an impromptu escape pod to get back to Red Dwarf. ("Terrorform", Series V)

An advanced escape pod stolen from a colonisation seeding ship was also housed on the Simulant Battle Cruiser. To escape from the disintegrating Simulant ship, Rimmer sneaked aboard it in a stress-induced panic, abandoning his crew mates. The pod was set to find the nearest S-3 (or Earth-like) planetoid. The one it found was through a wormhole to which the pod altered course and traversed through. The pod contained various forms of terraforming equipment such as eco-accelerator rockets and genetic modifiers (possibly related to the ones on the DNA Ship). Rimmer used these to create biological clones of himself for company. Due the time dilation effects of traveling through the wormhole, Starbug did not reach Rimmer's new homeworld for 600 years. When the other Dwarfers finally arrived, they found an entire civilisation of Rimmer clones who had imprisoned the original. ("Rimmerworld". Series VI)

An escape pod from the SS Hermes carried the sole survivor from that ship's corrosive virus attack, Talia Garrett, to Red Dwarf. The pod was in the form of a triangular prism, and was textured red much like Red Dwarf itself. This pod also accidentally brought the chameleonic virus to Red Dwarf, which the started to corrode the pod and then Red Dwarf itself. ("Only the Good...", Series VIII)

Red Dwarf later detected a yellow cryogenic escape pod in orbit around an ocean moon. As Red Dwarf approached, the occupants of the pod were thawed out. Professor Rachel Barker attempted to contact Red Dwarf, but along with her companion Colonel Jim Green were then instantly flash-heated to death as they attempted to give a warning. Ascertaining that the pod was originally from the SS Samsara which lay at the bottom of the ocean moon, the Dwarfers decided to go down to the wreck and investigate the tragedy which had occurred there. ("Samsara", Series XI)

Three persecuted Cat Clerics fled the Cat Fleet in a commandeered shuttle which they used as a lifeboat. (The Promised Land)

In the science room, Holly detects a space pod. Rimmer believing it to be aliens commands Holly to bring it in ("Waiting for God", Series I)

A Red Dwarf garbage pod, which Rimmer thinks is an alien escape pod ("Waiting for God", Series I)

Lister knows that it is a garbage pod ("Waiting for God")

Does the pod contain Barbra Bellini or the Simulant Convict? ("Justice", Series IV) 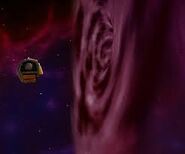 The terraforming-specialised escape pod Rimmer escapes the Simulant Battle Cruiser in, about to go down a wormhole ("Rimmerworld", Series VI)

The pod which escaped the SS Hermes, containing Talia Garrett and unfortunately the Chameleonic Microbe ("Only the Good...", Series VIII)