Tongue Tied
Register
Don't have an account?
Sign In
Advertisement
in: Series I, Places, Lister,
and 3 more

Fiji (known to Felis sapiens as Fuchal or The Promised Land) is a tropical island region of Oceania on Earth, the homeworld of humans.

Fiji was renowned for its beauty shortly before Dave Lister's time.

The Felis sapiens who evolved aboard Red Dwarf over three million years and who were descended from Lister's cat Frankenstein remembered and worshipped Lister as "Cloister". They also revered Fiji as "Fuchal" and commonly referred to it as "The Promised Land".

Dave Lister, the lowest-ranking crewmember of Red Dwarf, wanted to retire to a farm in Fiji as part of his life plan. This was because, as Arnold Rimmer delighted in pointing out, a volcanic eruption had recently put it three feet underwater. However, Lister noted that made the flooded land cheap. Lister believed he would be able to get around that with drainage. His plan was to take his cat and the woman of his affections, Kristine Kochanski, to Fiji, get a sheep and a cow, and breed horses. Kris would ride the horses in white dresses, whilst Lister would operate a hot dog stand. Kris never knew about Lister's plan before it was scuppered when she died in the accident which killed the crew of Red Dwarf. ("The End")

The Felis sapiens species which evolved from Lister's cat revere "Fuchal" as their paradise, promised land and manifest destiny three million years later. After a long series of religious wars, they left Red Dwarf in two great Cat Arks to find Fuchal, and following Cloister the Stupid's map (actually Lister's old laundry list) one of them immediately smashed into an asteroid. The other Ark sped on, assured of their righteousness. ("Waiting for God", Series I)

Wherever Lister's bunk can be seen in the sleeping quarters (Series I-V, BTE and Series X) various posters can be seen. These include a poster of a woman in a white dress riding a horse on a beach in Fiji.

The boys from the Dwarf eventually discovered the remaining Felis sapiens aboard a new fleet of starships, who had been searching the Galaxy for Fuchal and upgrading their fleet with salvage from Space Corps derelicts they encountered.

Lister was gifted the Anubis Stone by three Cat Clerics, and Lister used the power of the sacred stone to upgrade Arnold Rimmer to a hologrammatical superhero alter-ego, "The Mighty Light". After Rimmer defeated the religious dictator Rodon, the liberated cats began to worship "The Mighty Light" instead of Cloister, drawing 'H' symbols on their forehead much like the hologram Rimmer, and flying the remaining ships in their fleet in a 'H' formation.

Before they departed, Sister Luna told Lister that Fuchal was not a physical place they would continue to search for, but instead is a mental, emotional and spiritual state they had attained on their adventure. (The Promised Land)

Fiji was located in the Pacific Ocean region of Earth, seen here behind Arnold Rimmer through the porthole ("Skipper", Series XII)

Fuchal and Cloister the Stupid as depicted in the Book of Smeg ("Waiting for God", Series I)

Cloister in Fuchal in the Book of Smeg (The Promised Land) 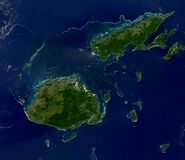 The real-life Fiji / Fuchal of the 21st century, pre-flooding

An artist's impression of Red Dwarf getting to Fiji (MuddyPaints)