Holograms are a major plot theme in the Red Dwarf franchise. One of the central characters, Arnold Rimmer, has been dead for three million years, but remains about the mothership as a holographic resurrection of his former self.

A common characteristic of most holograms is a stylized capital "H" on the individual's forehead. However, this seems to be an optional feature as the hard-light hologram Ace Rimmer doesn't have the H when he meets up with the boys.

Due to the massive power requirements of sustaining a hologram, Red Dwarf can only have one hologram at a time; this is currently Arnold Rimmer. Rimmer is usually created from the Hologram Simulation Suite aboard the ship, but can also be maintained by a Light Bee which will allow him to leave the ship.

Hologram
(noun) a special type of photograph or image made with a laser in which the objects shown look solid, as if they are real, rather than flat

The Hologram Simulation Suite (HPS) is the central control for the hologram on Red Dwarf. It stores all the different components that make up a human hologram, as well as the computers for running the holographic program. This center feeds a small unit that projects the light of holographic form.

This small unit is called a light bee. It flies around inside the confines of the projected form. In the novel Backwards it is shown that a light bee can be used to press switches if the hologram maneuvers in the right way. The novel Better Than Life had the hologram Arnold Rimmer remotely projected onto Starbug from Red Dwarf, and once the connection to Red Dwarf was broken, he rematerialized back on the mother ship.

Red Dwarf could only sustain one hologram at a time, as said in numerous episodes. In the first novel, this is explained because creating and maintaining a hologram, along with its personality and memories, took up as much energy per second as it would to light up Paris for a year. In the novel, Rimmer was only able to generate a second hologram by using the projection unit on Nova 5, while in the TV series, they attempted to set up a second hologram by turning off most of the ship's now-surplus power to divert that power into projecting a new hologram, as the ship was now only sustaining a 'crew' of two, Lister and Cat, rather than its potential full complement, and therefore no longer needed to keep various other functions and rooms in operation.

Despite being only a light projection rather than a living human being, soft light holograms still appear as though they may have the same requirements as a flesh and blood human. Although he didn't need to eat or drink (Holly could simulate these for him artificially), Arnold Rimmer appeared to require sleep ("Balance of Power") and when he went without it for an extended period he displayed signs of physical exhaustion ("Me²"). This may however have been a psychological requirement rather than a physical one. He also engaged in Necrobics, but is unclear if exercise was a requirement of the hologram state.

It is unclear whether or not holograms go through an aging process similar to humans. It is initially suggested that holograms are immortal, or at the very least can exist significantly longer than humans when Rimmer exclaims to Lister "You can't leave me on my own for three million years. I'll go peculiar." ("Future Echoes") Rimmer later tells Lister that he wants to be left on for the duration of the journey after all, confirming that he can survive for at least three million years. Later in the series, even hard-light holograms are designed to go on without showing signs of age for long periods of time by human standards when Rimmer is imprisoned for 557 years by his own clones ("Rimmerworld"). In the very next episode however the crew meet older versions of themselves and Rimmer seems to have aged just as much as the others ("Out of Time"). Rimmer also has an older appearance the Dave era of the show but this is simply due to the aging of Chris Barrie and not a part of Red Dwarf continuity. It is possible that Rimmer's lack of ageing while captive could be due to ageing being a process that is not automatic in holograms and takes updates that can only be done on Red Dwarf or Starbug. This would make sense considering that there would seem to be no reason why a person proposed entirely of light would have to age as if they were alive but it may be preferable in some cases including Rimmer's to allow an artificial ageing process to spare Lister the disconcerting experience of always looking increasingly old compared to his bunk mate over time.

There are certain problems that Holograms can experience, for example if the Hologram Projection Suite is damaged, the hologram has been known to develop multiple personalities, usually copying any of the crew on file or even people they know ("Queeg") they are vulnerable to electronic viruses such as the holo-virus which can cause insanity and death in holograms if left unchecked. ("Quarantine") The data that is used to generate a hologram is refined to an algorithm and duplicated electronically, unfortunately flaws such as hereditary and environmental medical disorders are copied as well. ("Rimmerworld") If the hologram has too much resentment building in them, this generates a self-created malware that if left unchecked can result in the hologram "crashing" (referred to by Lister as the "spinning beach balls of doom") requiring a "resentment drain" to restore them to normal. Surprisingly, without the excess resentment, Kryten pointed out Rimmer's logic and reasoning abilities had dramatically improved. ("Trojan") Even in "indestructible" holograms such as Hard-Light holograms, a straight ballistics shot to the Light Bee inside the hologram could cause power leakage and eventual death (or second death) of the hologram. *Stoke Me a Clipper")

In low-power mode, a hologram has the same limitations as a soft-light hologram, but is seen only in black-and-white, is 'fuzzy', and can only speak in mono sound.

Rimmer is described as a low-power hologram in the novel Infinity Welcomes Careful Drivers and is also depicted this way in the Red Dwarf Smegazine comics.

Doug Naylor originally wanted Rimmer to appear as grey-scale in the television series, but due to budgetary reasons this idea was shelved.[1] However, Rimmer does eventually appear in grey-scale low-power mode in the special The Promised Land. 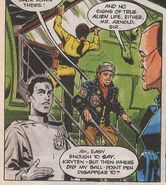 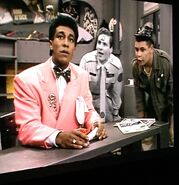 How the grey-scale was originally intended.[2]

For most of his time on Red Dwarf (Series I-VI and sometimes briefly in later series), Rimmer appeared as a soft-light hologram.

Soft-light holograms are the most common form of holograms in the Red Dwarf universe. They are similar to low-power holograms in limitations; they are still intangible but appear "solid" and in full colour.

Holograms as used on Red Dwarf are computer simulations of humans, typically deceased. Their memories, personality, knowledge, and skills are copied from their organic brains and are stored on disk. From this, a computer simulated hologram is created of them, composed entirely of light. A hologram has the same drives, emotions and thoughts as a regular human, only cannot touch or interact with the physical world (though they can interact with holographic objects and fellow holograms).

Some soft-light holograms were very advanced, and the arrogant holograms aboard the tachyon-based Enlightenment still studied Deep Space three million years later. Although these holograms could still not interact with the physical world, they could interact with each other as though they were physical. ("Holoship")

Holo-lamps could make video recordings and replay them three-dimensionally and holographically. ("The Beginning")

There was a fundamental breakthrough with holographic technology. Advanced hard-light mode was discovered and developed by Legion. In typical "soft-light" mode, a hologram is merely composed of light, can pass through solid objects, and as such cannot interact with people or surroundings (except in a very limited way with the Light Bee). However, in "hard-light" mode, a hologram combines with a form of force-field to attain a kind of solidity. A hard-light hologram may even interact with their surroundings as if they were alive, which included being able to eat and engage in physical contact with other people. Another benefit of this type of hologram included greatly enhanced strength (Lister made mention of Rimmer wrenching a fridge off of the wall with virtually no difficulty) as well as practical indestructibility (against such things as concussive force and explosions, although a direct hit to the light bee with a bullet or something similar would kill the hologram). The drawback being that it uses a lot more power than soft-light, as well as rendering the hologram capable of sensing and even feeling pain.

The Holowhip and the Holo-saw were weapons that may have worked on the same principals of hard-light holograms.

An incredibly advanced form of Hologram technology was developed aboard the Iron Star and later acquired by the Dwarfers. Composed of a form of quantum energy named Diamond-Light, Diamond-Light Holograms could alternate between Hard-Light and Soft-Light at will, but with additional powers such as light and matter manipulation, super strength, and being able to turn into a ball of light and super speed.

Rimmer briefly became one such hologram, and named himself "The Mighty Light". However, in his haste to become overpowered he ordered Kryten to bypass the European Space Agency safety checks before upgrading him, and due to immense power drain it didn't last long before the battery in Rimmer's Light Bee was fried. Forced to go into low-power mode, Rimmer was forced to plug his Light Bee into a wall socket and carry an extension cable around with him.

Rimmer would later use power from the Anubis Stone to become the "Mighty Light" again, and used his powers to defeat Rodon and his Feral Cats. The rest of the Felis sapiens then worshiped Rimmer as their god 'Cloister' instead of Lister. (The Promised Land)

Appearances of HPS and/or Light Bee