Hoppers were transport vehicles in the Red Dwarf franchise.

Hoppers were a mode of transport for the moon of Mimas as mentioned in the first Red Dwarf novel Infinity Welcomes Careful Drivers.

Hoppers were designed due to the traffic congestion on Mimas which would cause starvation in the queues. They hopped like metallic kangaroos and were known to spend most of their time in the air. They were a nightmare to drive thanks to their having 22 gears. Parking is a problem, even though they can be stacked one on top of the other until five or six high.

Dave Lister stole or "borrowed" a hopper from the back of the rank when the rest of the cabbies huddle in another for warmth, usually one that had its suspension shot to hell. He would then cruise the streets picking up fares to make some extra money. It was here that Lister first met Arnold Rimmer for the first time; the man with whom he would spend the rest of eternity aboard Red Dwarf. Rimmer was asking the taxi to take him to a droid brothel, saying that his name was "Christopher Todhunter".

Hoppers were not seen in the television series, but when the older series were remastered in the late 1990s, the scenes with shuttlecraft Blue Midget (such as Rimmer's Deathday) were redesigned to incorporate the legs of the hopper. Blue Midgets would then appear with the legs of the hoppers in Series VIII, which was explained by the whole ship being reconstructed by the nanobots. However the Blue Midget was not seen with hopper legs in the final series, looking more like its original design. 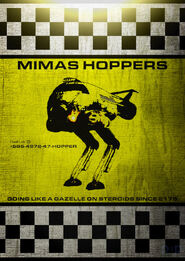 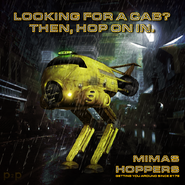 Hopper artwork by P2P productions.
Add a photo to this gallery
Retrieved from "https://reddwarf.fandom.com/wiki/Hopper?oldid=21502"
Community content is available under CC-BY-SA unless otherwise noted.