Iron Star was a vast Space Corps derelict space station which was in orbit around a small desert planetoid in Deep Space for three million years.

Red Dwarf passed by Iron Star, and Arnold Rimmer and Kryten detected a distress signal coming from it, or a shuttle which had taken refuge aboard it. As usual, Rimmer was too frightened to answer it, saying that the boys from the Dwarf are too old for such things and that the distress call is probably a trap by genetically-engineered, man-eating cheese. Kryten reminded Rimmer that Space Corps Directives dictate they should help any fellow space traveler in need. Rimmer ordered Kryten to erase his memory of it.

A short time later, the Dwarfers had re-uploaded their old computer Holly. However, restored to factory settings, Holly had no memory of who they are and decided that Red Dwarf was now redundant, and so it must be decommissioned. Holly overheard the Dwarfers plotting to erase him, and so Holly then forced them off Red Dwarf.

The Dwarfers spent three months in Starbug 19 searching for Iron Star, since it was the only habitable location in the Galactic vicinity. By the time they found it, Lister and Cat had long hair and beards. The Dwarfers docked with Iron Star and began to explore it.

Aboard they found a Hologram Simulation Suite many years ahead of their own, which could transform holograms to "Diamond-Light", the most advanced type of hologram in existence. Rimmer impatiently ordered Kryten to upgrade him, despite Kryten' protestations that European Space Agency checks should be carried out first.

When Rimmer was upgraded he became overpowered and took on the alter-ego "The Mighty Light", and began moving around the station at super-fast speeds as a ball of light. However, this rapidly burned out the power of Rimmer's hologrammatic Light Bee. A de-powered Rimmer was then forced to plug his Light Bee into a wall socket, and if he wanted to leave the room he had to take an extension cable with him.

Exploring the station further, much to their surprise the Dwarfers found three Felis sapiens, one male and two female, hiding in a storage cupboard. Cat is shocked to meet more of his species. Realising that it must have been them who set off the distress signal, they get acquainted. The cats reveal that they are Brother Sol, Sister Luna, and Sister Peanut. They worship the old religion - that is, they worship Lister as their god, Cloister, despite Lister refuting this.

Sol, Luna, and Peanut explain that they are Cat Clerics in the old religion, and their species have come under oppression from a tyrannical sect, the Feral Cats, who have outlawed the old religion. They fled from the Ferals, escaping a death sentence, and also stealing a symbol of their power in the process - the Anubis Stone.

However, in timely fashion the Cat Fleet then arrives in orbit of the planet also, and the Ferals board Iron Star along with their sovereign and self-appointed 'living god', Rodon. After a brief altercation, Rodon reclaims the Anubis Stone. Leaving two guards behind to deal with the Dwarfers, Rodon ordered them to put the Dwarfers and the Cat Clerics into an airlock and blow them out into Deep Space. Rodon and his aide Count Ludo then teleported back to their his flagship, leaving his henchmen to do the dirty work.

The Dwarfers fought back against the Feral guards, unsuccessfully using vegetarian forks to fend them off, but were forced back into the airlock along with the Cat Clerics when the guards pulled ray guns on them. However, Rodon was growing impatient and ordered his flagship to fire meow missiles upon Iron Star. When reminded he still had loyal followers aboard Iron Star, Rodon told his aide to 'send fish to their mammies'.

Iron Star is blown to smithereens, although the first volley of missiles caused a ship quake which blew the two Feral guards out into space, whilst the Dwarfers and the Cat Clerics were ironically saved by the airlock they were inside. The Cat Clerics took it as a divine miracle that "Cloister" had saved them.

The Dwarfers managed to escape with the Cat Clerics in Starbug in time. However, Starbug takes heavy damage from the debris and the rear section is set on fire. Lister separates the 'bug into two halves, and in the front section they are forced into a chase across the surface of the desert moon below. (The Promised Land)

Iron Star about to explode

An interior corridor aboard Iron Star

Entering the science room. The Iron Star logo can be seen on the wall to the right.

... and depletes his Light Bee within a minute

The Dwarfers find some Felis sapiens hiding on Iron Star

The Dwarfers find the three Cat Clerics hiding in a storeroom

The Cat Clerics prostrate themselves before Cloister 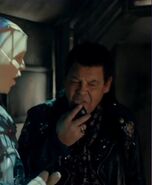 Rodon and the Feral Cats teleport into Iron Star

Rodon has the stone and prepares to beam out