The Jupiter Mining Corporation uniform used aboard Red Dwarf prior to the destruction of the ship (Pre series 1, and by Arnold Rimmer in Series 1 and 2 and a flashback in "Stasis Leak"), after the rebuild in Series 8, and in the Alternate Reality in "Ouroboros".

The Admirals uniform consists of a pair of white trousers, black dress shoes and a thigh length dress jacket (white) and a cap. The uniform also has gold arm ranks that go from the cuff to the elbow, a pair of gold epaulets and a gold aiguillettes on the right shoulder. The left breast contains real medals and not medal patches. There is also gold collar trim.

The Admirals uniform from RD: Kryten and RD: Better Than Life

The Admirals uniform from RD: Me²

The uniform for male senior offices consists of a pair of dark beige trousers and ankle high black boots and a black military style belt and a lighter beige shirt with a black undershirt. Female senior offices wear dark grey trousers with white shoes and have a white undershirt and a different collar on the shirt. The layout on the shirt is the same for both. The left arm has the Red Dwarf mission patch on, the left breast has the service patches and name patch on, and the right breast has a row of pen holders with the division role (Captain, Navigation Officer etc) sewn on. Some officers have collar pins.

This uniform is virtually the same as the previous one but the collar is normal closed with a square ended tie with an additional patch on the bottom of the tie. This uniform also lacks the pen holders on the shirt.

Three versions of the jumpsuit where seen. The grey jumpsuit was seen in RD: The End were Rimmer wears it for his astronavigation exam, the second is the orange jumpsuit Lister makes Cat wear in RD: Stasis Leak (note: this uniform is presumably worn normally without the shiny silver shirt with fur collar) and the yellow jumpsuit with black trim Rimmer wears in RD: Stasis Leak. In addition technicians in the Drive Room wear a dark blue jumpsuit. 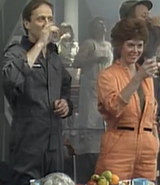 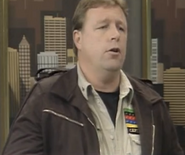 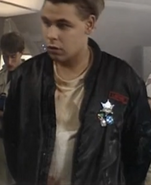 The medical uniform was a long white single breasted tunic with a high collar with white trousers and an optional white hat, the mission patch was worn on the left arm while a pined name badge (rather than a sawn on patch) was attached on the left breast. 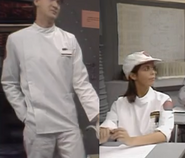 A ship issue hat was available and was seen worn by most members of the crew regardless of the uniform. A waistcoat version of the shirt was also an option RD: Stasis Leak. For onboard funerals a black tie (standard pointed one) and black armband were worn on normal uniform.

The waistcoat version of the shirt 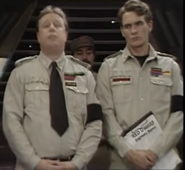 The tie and armband

Contrasting with the dull tan and brown uniforms of the original timeline uniforms this universe’s JMC uniforms were a lot brighter. ("Ouroboros")

This uniform consisted of a pair of black calf high boots; lose dark blue trousers, a dark blue jacket with breast pockets, a light blue shirt, and a dark blue tie, also with a black utility belt. Unlike the senior officers uniform this uniform was decorated with white piping along the trousers and jacket with a clip on name badge (like the medical uniforms).

These uniforms are a light blue jumpsuit with a darker blue crew neck undershirt, black boots and black zips on the thighs, arms, and chest and a name badge on the left breast, a security version of this uniform has a black belt and cross belt running from the right shoulder to left hip.

Similar in style to the original uniforms the uniforms of the rebuilt Red Dwarf from series 8 returned to a beige scheme for the duty uniforms. New uniforms were also available for the newly included Tank inmates with brighter colours.

This new style included one style of uniform for all officers with individual modifications. The standard uniform was a light beige pair of trousers with black boots, a light beige shirt (the same shade as the trousers) with epaulets and chest pockets, and a beige or black belt with a darker beige tie, when a tie was not been worn a white under shirt was visible. Ranks were gold badges on the collar with the division badge on the right breast and an ID badge on the left breast, and a mission patch on the right arm. The sleeves on the shirt were designed to be worn down or rolled up.

With black belt and holster

With skirt and heels

Medical staff wore a long white lab coat over the top of the standard uniform; the lab coat featured rank pins on the collar in addition to the pins on the collar of the shirt underneath. Traffic control uniform was a high necked black F1 style uniform with a large JMC across the collar. Security guards on canary missions wore a standard shirt with a white crewneck undershirt, with camouflaged trousers and a beige waistcoat. Prison Guards also had an armoured uniform; it consisted of black body armour with a black helmet. Like on the old ‘Dwarf’ utility jumpsuits were available, this time in red with a black cap and utility belt. 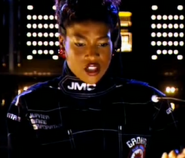 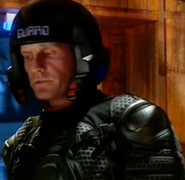 The uniforms worn by the inmates of the Tank were lilac coloured F1-style jumpsuits with black highlights, with no mission patches or name badges. Other prisoners had identical uniforms but in blue (Birdman), pink Baxter, or grey. All colours of jumpsuit had ‘Prisoner’ written across the back in silver. 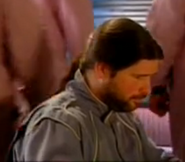 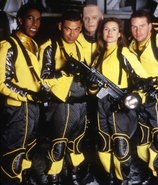