M-Corp was a conglomerate corporation which gained a monopoly over every industry, eventually buying out the Space Corps and the planet Earth itself at some point in the 26th century.

M-Corp also bought out the Jupiter Mining Corporation, which owned the mining ship Red Dwarf, and sent out software updates to the Red Dwarf to take the ship over. However, these updates were not installed until three million years later, causing chaos for the crew still aboard.

M-Corp bought out the Jupiter Mining Corporation at some time after the radiation leak that wiped out the original crew of Red Dwarf. At some point during the 26th century, they brought the entire planet Earth, already having ownership of all of the power generation faculties and the rainwater, they even owned things that no-one wanted (which included maggots, quicksand and American chocolate). They were able to stop any resistance to this due to them being able to tax thinking, this was made possible by them monitoring the electricity generated by the brain and charging accordingly, making it unaffordable for anyone to fight back.

When the system updates were downloaded to Red Dwarf, it infects it's employees with a virus - Perception Filter Software - that only made a variety of M-Corps products visible, any other products or even people are rendered invisible and in the case of people inaudible (such as when Dave Lister couldn't see or hear first Arnold Rimmer, then Cat and finally Kryten).

M-Corp also had a virtual-integrated environment made accessible via a teleporter, the M-Corp World, where a trial weekend is made available to those wanting to enter it, there are five packages available: Platinum, Gold, Silver, Basic and Basic Light (which allowed Lister to speak to up to five people for up to five hundred words a day) everything within it is extortionately priced, from friends, to pain pills, to a glass of water (water is extra) to fire extinguishers (insurance is extra) to additional words and advice from the virtual assistant (who creates problems that forces Lister to buy the items that he needs to deal with them) when credits run out, they are charged with time, which can age those within it rapidly as they continue to buy things as their willpower is eroded. Those who go in, also can't go out, unless they buy early release or earn enough to do so.

The virtual assistant, Aniter, was defeated when the Dwarfers located Lister's coordinates by tracking Chippy which was still inside Lister, teleporting there, and Kryten then purchased a malicious virus from Aniter designed to destroy her. This also reverted Lister the age he was before he entered the virtual environment, and they were able to restore Red Dwarf to an earlier version of the operating system, before the M-Corp updates were installed, and the only major loss was that Rimmer lost a month of memory. Lister on the other hand was harder to treat as the only way to remove the virus preventing him from seeing the others is to wipe his mind clean and replace it with a backup from when he was around 23, as that was the last time he backed his mind up. ("M-Corp", Series XII) 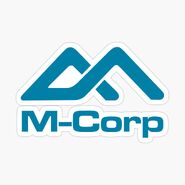