Olaf Petersen was a Danish catering officer aboard the Red Dwarf and best friends with Dave Lister. The character appears in both the TV series and Red Dwarf novels.

Before the accident which killed Olaf and everybody else except Dave Lister, Lister and Petersen were best friends, often getting drunk together and going on planetary shore-leave together. Petersen is sorely missed by Lister and is frequently mentioned by Lister afterwards, much like Lister's lost love Kristine Kochanski.

Petersen is mentioned as having been resurrected along with the rest of the crew by the nanobots in Series VIII, but since the regular characters are imprisoned in The Tank during that series Petersen is not seen.

First appearing in "The End", Petersen is the best friend of Dave Lister. He, Lister, Selby and Chen spend most of their free time getting drunk as can be seen in flashback in "Balance of Power". Like the rest of the crew, Petersen was killed in the radiation leak. His remains are found in the Drive Room as a white powder that Lister tasted. Petersen was resurrected along with the rest of the crew in Series VIII, but is not seen, although often referred to.

Petersen was proud of being Danish. He sported numerous tattoos on his arms, among them were ones that read "Candy", "Denmark Forever", and a skull-and-crossbones.

Petersen joined Lister, Selby and Chen in the refectory for George McIntyre's welcome back party. He fell for Lister's coin trick and spent some time banging himself on the head. He was later killed in the accident that wiped out the crew. ("The End")

Petersen used to lead his friends in the drinking game "I've Been to Titan", which he may have written. In the extended scene of this party flashback at the Disco (on the Series I DVD), Petersen's arms are covered in tattoos that he doesn't remember getting whilst drunk. He also berates the others for still having their vision at 11pm, not being blind-drunk. ("Balance of Power")

Rimmer once had his data disc corrupted and ended up with Petersen's hairy, tattooed arm in place of his own. Rimmer was angry about this, as he had no idea where that arm might have been. It started to attack him and beat him to the ground before Holly could repair the disc. ("Balance of Power")

Petersen was presumably the chef involved in the "Gazpacho Soup" incident. The book would seem to hint this more strongly. ("Me²") (Infinity Welcomes Careful Drivers)

When Lister used a stasis leak to return to the ship before the accident, he ran into Petersen, who was trying to pick up two girls returning from planet leave. Lister was very happy to see him, which surprised and embarrassed Petersen, who had seen him at breakfast. ("Stasis Leak")

Petersen bought a kitdroid version of Marilyn Monroe on the moon Callisto, but never assembled it. Lister later put it together as a gift for Kryten. ("The Last Day")

In a deleted scene of the Series VI episode "Psirens", Arnold Rimmer is trying to ascertain who is the real Lister and who is the Psiren Lister by asking them personal questions. During this it emerges that Lister has a tattoo on his right buttock; it is a heart with a arrow through it, and underneath dripping in curry sauce, "I love vindaloos". He got it on planet leave on Ganymede, when Olaf Petersen spiked his cocktail with four-star petrol. He awoke with the tattoo, and to learn that he had enrolled as a novice monk in Ganymedian monastery. Lister discovered the tattoo when he handed in his habit.

At some point, Petersen got Lister so drunk that he had a tattoo placed on his inner thigh that said "I Love Petersen". ("Out of Time")

When the nanobots restored Red Dwarf and its crew, Petersen was one of them. He was unable to help put out the fire caused by Starbug's destruction in the cargo bay because he was drunk, according to Selby and Chen, who did turn up. ("Back in the Red I")

He later recovered Lister's Guitar from Starbug's wreckage and sent it to him. Rimmer was upset at the thought of sharing his cell with the guitar, but the guards had confiscated the strings. ("Krytie TV")

Petersen then presumably evacuated Red Dwarf with the majority of the crew. ("Only the Good...")

When searching through Petersen's old quarters once again, Lister found the book Stupid But True! - Volume 2, which contained the interesting facts about Swedish moose that play a large part in the episode. ("Trojan")

When Rimmer used a Quantum Skipper to explore different dimensions, he came across a dimension where the Cadmium II radiation leak had not occurred, and the crew of Red Dwarf were still alive. Rimmer repeatedly asked Holly if "everybody was still alive", in a mirror of the scene where Lister comes out of stasis in the pilot episode, repeatedly asking Holly is "everybody is dead". One of the crew who Rimmer asked if still alive was Petersen, and Rimmer seemed quite disappointed that Holly said Petersen was alive. ("Skipper")

Olaf Petersen along with Selby and Chen were featured in the Red Dwarf Smegazine.

Lister first met Petersen aboard the shuttle heading for Red Dwarf. He drank twelve cans of whiskey rather than pay duty on them and had to be dragged aboard Red Dwarf by Lister. He was sick and then tried to tip the skutters who cleaned it up. Petersen was working his way to the moon of Triton, where he had bought a house. Triton had no oxygen atmosphere installed, so Petersen would have to wear a space suit about his own home.

Petersen liked to lampoon Rimmer by parodying the Rimmer Salute, which involved slapping himself several times. He and Lister would get drunk every night until they spent a shore leave on Miranda. Since no alcohol was allowed there, Petersen was forced to go teetotal. He became so impressed with the effects of being sober that he gave up drinking completely.

After Lister was revived from Stasis, he asked Holly why he had brought back Rimmer instead of Petersen. Holly replied that Petersen couldn't keep himself sane, never mind Lister. (Infinity Welcomes Careful Drivers)

When the Boys from the Dwarf escaped the game Better Than Life, they briefly found themselves on a perfect version of Red Dwarf. In this scenario, three other people had survived the accident - Rimmer, Kochanski and Petersen. The Dwarfers rejected this fantasy and returned to reality. (Better Than Life) 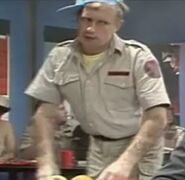