Tongue Tied
Register
Don't have an account?
Sign In
Advertisement
in: Actors, Real People, Behind the Scenes,
and 2 more

Blackstone was active in West End London theater from 2005 to 2013, and currently continues her career as a voice-over artist.

Originally from Washington, D.C., Rebecca Blackstone moved to London to attend RADA. After leaving drama school, Blackstone has acted in plays such as The Sunshine Boys alongside Danny DeVito and Richard Griffiths, and also in Cool Hand Like alongside Marc Warren.[1]

Alongside plays and musicals, Blackstone has also provided voice-over work for a number of documentaries, mobile phone apps, and home video console video games. Among her video game roles are as Eva in DmC: Devil May Cry (2013), various voices in Guitar Hero Live (2015), and Bracken Meadows in Ni no Kuni II: Revenant Kingdom (2018).

Rebecca Blackstone's only television credits are with Red Dwarf. Blackstone portrayed the maniacal computer Pree in the Series X episode "Fathers and Suns". (2012)

She notably took part in Ganymede & Titan's "DwarfCast 37 – Fathers & Suns: Instant Reaction", where she was interviewed. The Dwarfcast was released soon after the episode itself had first aired.

She also had a small role in the Series XI opener "Twentica" (2016) as Big Bang Beryl, causing her to appear in another Dwarfcast in that year. 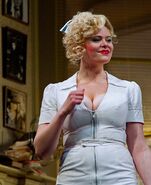 Blackstone being made up as Pree

Blackstone in a interview for the Dave channel 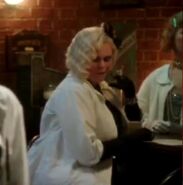