Tongue Tied
Register
Don't have an account?
Sign In
Advertisement
in: Real People, Behind the Scenes, Back to Earth,
and 3 more

Richard Naylor has been an executive producer of Red Dwarf since Series X. He is the son of Doug Naylor, one of the two original creators / writers of the show.

In 1996, Richard Naylor had an uncredited cameo as a boy in the crowd of the Camelot Game ("Stoke Me a Clipper", Series VII)

Whilst attending film school IN 2008, Richard Naylor became a junior member of the production team for Back to Earth (later retconned as Series IX)

Richard Naylor graduated in 2011 from the London Met Film School with First Class Honours in Practical Filmmaking BA. He is also married.[1]

From Series X (2012) onwards, Richard Naylor became an executive producer on Red Dwarf, and also appears in the DVD documentaries. Richard Naylor was key in obtaining Baby Cow Productions as a financier of Red Dwarf from Series XI onwards, bumping up production values; and he was also key in obtaining a number of celebrity cameo roles for Series XII. 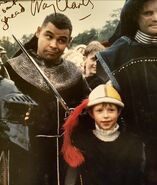 A young Richard Naylor with Craig Charles and Robert Llewellyn in 1996 (Camelot Game, Stoke Me a Clipper, Series VII) 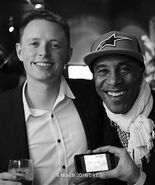 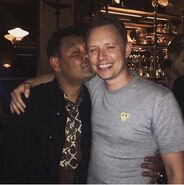