SS Centauri was a Space Corps starship impressive in a number of characteristics, including it's imposing size, very fast speed, and heavy armament. It was powered by Crystalline Turbine Drives.

Three million years in the future, SS Centauri still sojourned through Deep Space. It had been commandeered by an unscrupulous trio led by the Simulant Trader, and which also included his unnamed Kinitawowi GELF associate and a "zoney" mechanoid named Able. Able's brother Kryten was stolen and spent some time aboard.

The heavily-armed ship eventually attacked the boys from the Dwarf with laser cannons, but was destroyed when Able used Kryten's negativity (from his mind nega-drive) to cause the Simulant Trader to commit suicide by exploding SS Centauri in a fit of depression. Although this action also killed Able, it saved the the vastly inferior Starbug crew from SS Centauri. ("Beyond a Joke", Series VII) 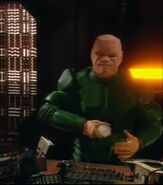 Able shoots up some Outrozone aboard SS Centauri

Able with a Kinitawowi slavemaster aboard SS Centauri

Starbug hides from SS Centauri in an asteroid belt

Able takes an escape pod and surroundsSS Centauri with the Nega-Drive. This causes the Simulant Trader to blow himself up, ship and all.

Able's pod crashes in the aftermath of the explosion