View source
watch 01:25
Jurassic World: Dominion Dominates Fandom Wikis - The Loop
Do you like this video?
Play Sound
Rimmer: A world where no-one is blamed or rebuked, and no-one gets mocked or ridiculed.
Cat: That's what they say, but they'll never hold out after they meet you.
- "Timewave"

SS Enconium is a massive spaceship with a faster-than-light-drive. The starship originated from 24th century Earth.

A very unusual society had developed among its inhabitants, where audacious self-expression was encouraged, complete ineptitude was to be tolerated, and all forms of criticism were outlawed.

SS Enconium was washed up three million years into the future by a Time Wave. The boys from the Dwarf soon encountered it seemingly on a collision course with Planet Rimmer, which would ignite the Helium-7 on Planet Rimmer, killing them all. The Enconium was unresponsive to all the attempts of Starbug at communication. Arnold Rimmer was terrified that his Planet Rimmer may be harmed; Dave Lister was excited to meet other humans again. The Dwarfers decided to use dock Starbug with Enconium and investigate.

Starbug (right) chasing after the ship

Greta serves the Dwarfers in the diner

Ziggy at the controls in the Criticism Extraction Room 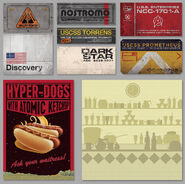 Licence plates in the diner[2]