The Death Ship acted as the mobile command base of the Simulant Generals. Captained by Simulant General Dominator Zlurth, the warship was generally used for missions that are a bit 'deathy' in nature.

The Death Ship was heavily armed and armoured, with powerful weapon systems and multiple Annihilator attack craft to deploy. Its only apparent weakness was its own Photon Mutilators.

The early history of the Death Ship is unknown, although Kryten seemed familiar with the warship, and was more than a bit concerned when he looked out of the window to see who was attacking them, noting that the Simulant Generals were cross-bred entities of pure evil.

After the thief Hogey the Roguey stole a prized cloth map from the Death Ship whilst the Simulants slumbered, the Death Ship gave chase. Unfortunately, Hogey went strait to Red Dwarf, since he was familiar with the crew and had a strange obsession with the gang, always offering them "duels across time and space". Hogey had apparently stolen the map to use as leverage in his games. However all he succeeded in doing was bringing the Simulant Death Ship strait to Red Dwarf, when they followed Hogey's ship there.

As the Death Ship began attacking the Dwarf, a hole was made in the hull of the sleeping quarters, which luckily for the Dwarfers was sealed when Hogey fell into it. The Dwarfers then ran down to the nearby cargo bay 3 where a Blue Midget was parked, and they fled into a nearby asteroid belt. Dominator Zlurth ordered his Annihilators to be deployed, and the asteroids blown up one-by-one.

Arnold Rimmer was able to come up with a plan after some receiving some startling revelations about his true parentage from his holo-lamp. Blue Midget left the asteroid belt to face the Death Ship and it's attack craft, which took position around Blue Midget and fired their missiles at the same time. However, Lister used Hogey's Molecular Destabilizer to make Blue Midget transparent, and the missiles passed harmlessly through Blue Midget, instead crashing into the Simulant ships on either side, destroying them instead with their own missiles. ("The Beginning", Series X) 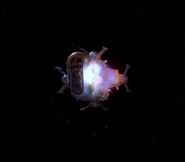 The Simulant Death Ship hit by its own missiles