Skutters, also sometimes referred to as the service droids, are small, motorised, claw-headed maintenance robots in the Red Dwarf franchise.

They were commonly used to maintain off-world colonies and were used in Space Corps spaceships. There are at least two of these whirring, squeaky robots seen in service on-board the Jupiter Mining Corporation vessel Red Dwarf in the television series, although there are said to be many more.

Thousands are said to be on-board Red Dwarf in the Red Dwarf Novels, with Arnold Rimmer accidentally crushing fifty of them at once in Better Than Life.

When Red Dwarf was fully manned, as seen in the pilot episode, the skutters were often seen performing menial tasks, such as cleaning, assisting with minor repairs (although they have a better trade union than Z Shift), and carrying away people's rubbish.

The skutters along with the garbage droids (under the command of Holly) kept Red Dwarf running after the accident that killed the crew, and for the three million years that the Felis sapiens evolved, through the Cat Wars and them leaving in the Cat Arks, and until Dave Lister awoke from Stasis. During this time however the skutters and the garbage droids were unable to keep Holly from going computer senile as they had no articulate speech capability and couldn't talk to him, effectively leaving Holly alone for aeons.

Perhaps the skutters seen three million years into the future are not the same ones originally brought aboard, as the skutters could create more of themselves, as seen in "Parallel Universe". However it is possible that some were the originals, judging by their own form of computer senility; for example the skutter which goes haywire and rewires the whole ship, including linking up the Self-Destruct System to a Vending Machine, in "Bodyswap". Since no real danger is present as it it was only linked up to the voice system of the self-destruct, and with Holly already having got rid of the bomb, it is unclear whether this was just a skutter genuinely going nuts, or just a practical joke on their part.

Although only two full-size skutters were seen on screen at the same time during the series' run, there is little evidence whether Red Dwarf has only two working skutters or whether there are more. A skutter with the number 4457 printed on its front in maroon is visible at George McIntyre's funeral in the pilot episode. Lister mentioned there were at least four (at least in the areas they worked in) and that one of them was completely mad, when he outlines the menial status of both himself and Rimmer, noting that the skutters have a better union, also in the pilot episode.

The skutters on Red Dwarf have a liking for John Wayne, and are members of John Wayne fan club. They are later seen dressed as little cowboys and Indians, firing off little pistols. They evidently still had this hobby whilst still in Earth's Solar System, as post pods are still tracking Red Dwarf with John Wayne paraphernalia. (RD: Better Than Life)

Since Arnold Rimmer's hologramatic form was not capable of handling physical objects, the skutters often found themselves doing menial tasks for him. However they often messed up, leaving Rimmer frustrated, although they do seem to have formed a bond with the rest of the Boys from the Dwarf. At various points in the series, Lister doesn't officially count the skutters as part of the crew (listing just himself, Rimmer, the Cat, Kryten, and Holly), but at other points he appears to be in a genuine friendship with some of the Skutters, such as worrying about Bob and his wife. They even sometimes accompanied the Dwarfers on outside journeys, such as when in joined in with Rimmer's Deathday party on the asteroid. When the original crew are resurrected and the regular characters are imprisoned in The Tank in Series VIII, the skutters will often smuggle them in contraband and luxury items to them through the air ducts, and even Boing with which they play a prank on Captain Hollister and the officers.

According to Kryten in The Last Day, one of the skutters is named "Bob." In Back in the Red II, Lister names Bob's missus as "Madge". Other names given to skutters are "Stabbim" mentioned by Rimmer in RD: Confidence and Paranoia (though this is a fake name given the context), "El Skutto", also by Rimmer, in Queeg (a joke name considering Rimmer's penchant for faux language), and "Pinky and smegging Perky," once again used by Rimmer, this time as mocking nicknames, in BTL. Pinky and Perky are a reference to the pig marionettes in the 1960's British show Pinky and Perky. "A skutter with the number 4457 printed on its front in maroon is visible at George McIntyre's funeral in the pilot episode, moving to the beat when 'See You Later, Alligator' is played. When they twist their heads a certain angle, they can give a "two-fingered salute" to others, which they did to Rimmer ("Balance of Power", "Queeg", "Back to Earth")

The skutter design is a box that looks a bit like a hover mower with a single arm which ends in a three-clawed hand with an electronic eye. Unlike many other mechanicals, they were not fitted with a chip to make them believe in Silicon Heaven; this was to save money during production. Due to this they find the concept comical, and only something stupid mechanoids believe in. The skutters are also apparently able to reproduce, two skutters could work together in order to build a number of smaller skutters, as seen in "Parallel Universe". A "female" skutter aboard the "female" Red Dwarf was designated by its pink facade, and at the end the "male" and "female" are seen with numerous smaller skutters at the end of the episode.

The actual level of intelligence the skutters have displayed varies throughout the series. While incapable of speech, they are capable of understanding voice commands, and they are able to articulate more complex statements by writing them out with a pencil and paper e.g. writing Lister a note begging him not to freeze himself again in stasis, because they didn't want to be left alone with Rimmer. In Back to Earth, the skutters are helping Rimmer to re-frame his "vending machine repairman of the month" award, and when it goes wrong the skutter begins bleeping "error, error", although this is the only time one is seen using words and not squeaking. They are capable of operating musical instruments, such as keyboards, as shown in a deleted scene of "Kryten". In "Queeg", a skutter is shown to be absolutely trouncing Rimmer at draughts (checkers). They are stated to have a better union than the human maintenance workers, and are intelligent enough to enjoy movies and steal luxury items from different parts of the ship.

On the other hand, both Rimmer and Lister have acknowledged that they aren't as intelligent as a human. In the "Bodysnatcher", Rimmer tries to get them to write a letter for him, but they can't even manage a single letter, although this could be down to computer senility or on purpose because they don't like Rimmer. At one point Rimmer was attempting to "cook" a fancy meal, by supervising the skutters to physically manipulate the utensils in a kitchen. As Rimmer explained, "you say 'Keep an eye on that lamb' and they do, they sit there for three hours and watch it burn". In response, Lister chides Rimmer that he shouldn't be so hard on the skutters, because they can only follow basic instructions and thus tend to follow them very literally. ("Better Than Life")

Rimmer also taught the skutters to play the Hammond Organ, employing them at his weekly Hammond Organ recital nights. This was used as the credits music to the episode "Dimension Jump".

The mechanism inside the props (Series I)

Two Skutters in Series I

Flipping a cheating Rimmer "the bird"

A male and a female skutter in "Parallel Universe" 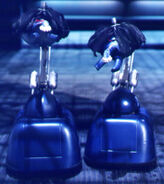 Bob the Skutter and Pete the dinosaur 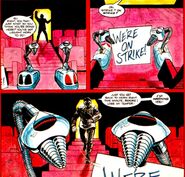 The skutter who Rimmer orders to replace Shaft 14 ("Give & Take", Series XI)

Rimmer in JMC Admiral's uniform planning out his new Officer's Club with Kryten and the skutters ("Officer Rimmer", Series XI)