The Space Bike was often used by Dave Lister to move around Red Dwarf instead of walking. Lister rides the Space Bike down the corridors in various scenes in Series I. Lister would also leave Red Dwarf on it to "joyride through asteroid belts", according to Rimmer.

Lister used the Space Bike during the early years, after he came out of three-million years in stasis after the radiation leak which killed rest of the crew, to find that he's the last human being alive and had the whole run of the ship to himself. It is unknown if Lister actually owned the Space Bike, or if he merely found it after the accident.

Lister's Space Bike was destroyed after Lister lent it to Kryten, who flew it into an asteroid. Lister recovered and repaired Kryten, but was unable to fix his Space Bike. However, other characters have used other Space Bikes at different times.

In the first episode of Series II, Lister helps Kryten disobey the overbearing Arnold Rimmer and break his programming. Kryten dresses up in leather as Marlon Brando in The Wild One, which Lister had shown him in the cinema. Lister lends Kryten the Space Bike on which Kryten rides off. Neither Kryten or the Space Bike appear again in Series II.

The opening scrawl of Series III reveals for the first time officially in the series that the Space Bike could fly in space, and act as a form of spacecraft. Kryten had gone off on it to find an S3 Planet and begin growing a garden, his dream. However, Kryten crashed the bike on an asteroid, and Lister recovered Kryten and was able to rebuild him (explaining the change in actors playing Kryten from David Ross to Robert Llewellyn; the events would have been further elaborated on in the lost episode, "Dad"). Kryten then joined the Boys from the Dwarf permanently, but Lister's Space Bike did not appear again.

It is possible that the bike used by Arnold Rimmer on Waxworld when rallying his troops was a space bike, since it had Holly built into the dashboard. ("Meltdown")

A burnt-out wreck of a space bike was present in the sleeping quarters of the Low Red Dwarf. This had actually been found outside the Shepperton Studios where it was filmed. ("Demons & Angels")

Ace Rimmer rides a flying Space Bike during a heroic mission into Nazi Germany to rescue a princess from Captain Voorhese. Ace kills the Nazis, and flies away with the princess on the back of the bike, and victoriously writes "smoke me a kipper" in smoke through the sky as he leaves. ("Stoke Me a Clipper")

Lister's Space Bike appeared again, or a similar bike, in the Sleeping quarters of Red Dwarf in Back to Earth. 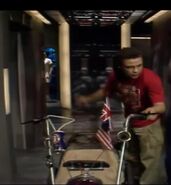 Lister gets on a Space Bike ("Future Echoes", Series I)

Lister on his first Space Bike

Arnold Rimmer on a space bike as he commands his Waxdroid troops on Waxworld ("Meltdown", Series IV)

The controls on Ace Rimmer's space bike ("Stoke Me a Clipper")

The Space Bike in the sleeping quarters in Back to Earth. This one is similar to the space bike used by Ace Rimmer in "Stoke Me a Clipper"