"What a god-awful depressing little hole."
~ Future Rimmer ("Out of Time")

Starbug is a type of shuttle-craft, green in colour, somewhat resembling an insect from the exterior. The Jupiter Mining Corporation class II ship-to-surface transport vehicle first appears in the first episode of Series III, and is used as the background to the Series III DVD cover and artwork.

The hangar bays and cargo bays of Red Dwarf house a dozen or so Starbugs, most of which were crashed in the first series they appear in. Whenever the boys from the Dwarf crash a Starbug, which is often, Kryten will re-sign Starbug 2 as Starbug 1 and so on, probably at the behest of Arnold Rimmer.

Starbug is larger than Red Dwarf's earlier shuttle, Blue Midget, which only had a cockpit. Starbug is around the size of a three- or four-story house, with three bulbous sections; the front cockpit (which would be analogous to an attic), mid-section (containing a medical room, an operations room, an airlock, a kitchenette, small sleeping quarters with some stasis capability, ect.) and rear engine rooms.

Starbug replaced Blue Midget as the crew's primary choice of shuttle in Series III and became the show's primary vehicle throughout Series VI and VII.

The original Red Dwarf came equipped with at least a half dozen Starbug vessels, as Starbugs are abandoned in "Backwards", "Marooned" and "Terrorform" as a result of various crashes, with the others retrieving the other two in another Starbug both times, and in "Bodyswap" after Rimmer (using Lister's body) crashes it and is retrieved by the others in Blue Midget. One Starbug was shown to have a cloaking device ("Backwards") and another had caterpillar tracks similar to Blue Midget, and was able to move through swampland ("Terrorform"). Yet another was outfitted for underwater travel ("Back to Reality") - the latter being the same Starbug the crew are trapped in during Series VI and Series VII.

Series VI takes place a full two centuries after the final episodes of Series V. As the internal layout of Starbug differs from that of the vessel's appearances in previous episodes, it is possible that Kryten remodeled one of the Starbug vessels during this time to better suit the crews needs, and extended it in size, being the only one not, in some way, incapacitated (Lister and Cat were in stasis and Rimmer's light bee was turned off, most likely to conserve power for such a lengthy journey).

The new design featured four main areas: the cockpit in the front section, the midsection and galley on the middle section bottom deck, the observation room (which doubled as quarters and medibay) on the middle section top deck, and the engine room, which was over all three decks of the rear section. In addition, Starbug was finally armed with laser cannons in the episode "Gunmen of the Apocalypse" by rogue simulants looking for a challenge. Previously the crew had shot molten piles of garbage out of the ship using an airlock. In later series, Starbug would reacquire its use of mining torpedoes.

Throughout Series VI and VII, Starbug is regularly seen traveling through different planetary systems and through completely different regions of interstellar space within short periods of time. Thus it stands to reason that Starbug is capable of interstellar travel. However, it is clearly stated that Starbug has no faster-than-light capability; it merely runs on hydrogen-powered thrusters, and so it remains a mystery how the craft manages to travel trillions of kilometers every few hours or every few days. One fan-proposed theory is that Starbug has an extremely powerful albeit semi-functional tachyon-powered drive that can periodically provide massive jumps through space (but still not enough, however, to catch up to their mothership). Super tachyon-powered drives are mentioned at various points in the Red Dwarf television series (such as in the episodes "Holoship" and "Ouroboros", during the latter of which they acquire one from Kochanski's dimension), so they are indeed part of the Red Dwarf canon.

Epideme also taught them how to make Starbug 300% faster in "Epideme".

A sign in the hangar bay of Starbug (seen in "Backwards") mentions "Hyper Drives".

For Series VII, Starbug was redesigned again, partially rendered in CGI and the sets were made substantially larger (the Starbug of Series VII was apparently similar to the TARDIS in Doctor Who; being larger on the inside than outside). The complex explanation on this occasion for the redesign was due to a time paradox caused by the battle with their technologically advanced future selves at the finale of the previous series (see episodes "Out of Time" and "Tikka to Ride"). Kryten explains that "dimensional anomalies" caused by this time paradox had expanded the engineering section, the cargo bay section and the maintenance ducts by over 212%. Apparently parts of the upgraded future version of Starbug from the time line they erased also came to co-exist with the present Starbug (such as the ability to travel through space and time). The new model had a smaller cockpit window (as a result of the rest of the craft being larger) and newly backward-angled legs, and its larger size allowed for many extra rooms, including separate sleeping quarters, its own cargo bay, its own medi-bay, and a re-designed and upgraded AR Suite. A deleted scene in "Tikka to Ride" depicts this Starbug isolating and separating its rear section, with the remainder departing under their own power.

This version of Starbug would finally be destroyed when the ship crashed and exploded in the newly nanobot-rebuilt Red Dwarf at the beginning of Series VIII.

Fleets of Starbugs are seen evacuating Red Dwarf, along with dozens of Blue Midgets, due to the Chameleonic Microbe in the Series VIII finale "Only the Good...".

A new version of Starbug is shown in the Series X opener "Trojan", but only as an external CGI model shot and the interior was not seen. Blue Midget is the main shuttle used in Series X. This provides a potential continuity clash with Series VIII in that the resurrected crew took every last shuttle in their evacuation of the decaying Red Dwarf in "Only the Good...".

According to Doug Naylor, since the main sets from Series X were reused in Series XI, the set budget allowed them to expand in scope to create things such as a new Starbug interior set.

Starbug appeared in the Series XI opener "Twentica" being piloted by the Dwarfers as they explore an uncharted area of Deep Space. This marks the first time the interior of a Starbug is seen since Series VIII. The newer Starbug still retains a retro feel, although it appears more high-tech, possibly due to it having more digital readouts and a blue-tinge similar to Blue Midget. After encountering a group of Expanoids, Starbug follows them through a time warp before crash landing on an alternate version of Earth in the 1920s, seemingly in a desert in America. This is due to an EMP completely knocking out all of the bug's electrical functions whilst in the Earth's atmosphere. However as testament to the ship's exceptional durability as shown on numerous previous occasions, Lister is able to restore power to Starbug and later in the episode pilot it back to Red Dwarf.

Later episodes in Series XI reveal that Red Dwarf has somehow reacquired its fleet of Starbugs from pre-Series XIII; for example in "Can of Worms" the Starbug is numbered as Starbug 19.

Series XII was filmed back-to-back with the previous series, and therefore the Starbug set was the same. However, the colour theme was changed and moved away from the blue-tinge to be more brightly-lit. The digital readouts were increased and given more complex designs.

The interior of the blue-tinged, new Starbug cockpit is featured on the Series XI DVD cover

The navicomp of Starbug (Series XII) 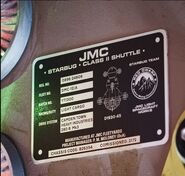 In Better Than Life, Starbug crashes onto an ice world: a rogue planet which, after being captured in a star's orbit and having its ice melted, turns out to be the Earth itself, which was ripped from its orbit after being officially renamed "Garbage World" and turned into the solar system's rubbish tip. Following the thawing of the ice, Starbug is all but destroyed by extremely concentrated acid rain.

Following an elderly Lister's death, the crew use another Starbug to deliver Lister's remains to a backwards universe using coordinates provided by Holly in a plan to reincarnate him.

In Last Human, the crew use Starbug as their primary means of transport following their loss of Red Dwarf. The crew encounter an alternate dimension version of Starbug once piloted by alternate versions of themselves, found drifting through space with their alternate selves dead throughout the ship excluding Lister's Other Self.

Throughout the novel, Starbug is used to get the crew from destination-to-destination as well as inadvertently taking Lister's Other Self and abandoning the real Lister.

In Backwards, the crew return to Niagara Falls to retrieve Lister on the backwards Earth however miss their deadline due to Starbug being in a state of disrepair after a bad landing in ten years. Following ten years, Starbug is flown backwards by the crew out of the backwards universe and towards Red Dwarf which has been hijacked by agonoids. Starbug is later the target of an assault by Pizzak'Rapp and Djuhn'Keep, the latter manages to blow a hole in the cockpit and upload a virus into Starbug's software which renders the ship inoperable. Lister and Cat, the only survivors, escape using Wildfire as Starbug is abandoned.

The introduction of Starbug was prompted by the introduction of Kryten as a main character, which required a new, bigger shuttle to hold the crew. The original concept of Starbug was named White Midget and was going to be white. With the second episode seeing Starbug crashing into a snow-covered planet the design team decided to re-colour the ship green to increase contrast and renamed it "Green Midget", before realizing its similarity to a bug and renaming it once more as Starbug. However, a script error does have Lister saying "How else can I pilot White Midget?" — although he was misnaming Blue Midget, the reference has left some fans intrigued. A ship named White Midget would finally appear on-screen in Series VII, in a flashback to Kristine Kochanski's alternate universe pre-accident. Like the crew's alternate uniforms in blue rather than beige, however, this is presumably a difference in her universe — although a different, unnamed, white ship would appear as the Canaries' primary transport in Series VIII.

The Official Red Dwarf Companion includes a sketch of an unused shuttlecraft design that is described as being the design for White Midget. This also features an early Starbug design labeled "Green Midget".

In the audio commentaries for the Series IV DVD, Chris Barrie surmised that the spherical construction of Starbug was the reason for its durability.

Starbug toys are one of the most common forms of merchandise based on the show, with numerous models commercially available. 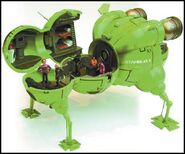 Retrieved from "https://reddwarf.fandom.com/wiki/Starbug?oldid=31636"
Community content is available under CC-BY-SA unless otherwise noted.