"Don't tell me. The heated seats have a massage function?"
―Rimmer on the owner's manual[src]

The Starbug Operator's Manual was a Haynes Manual-style book produced by the JMC for assisting maintenance and operation of the shuttlecraft Starbug.

When Starbug came under attack from the flagship of the Cat Fleet under Rodon, the rear section of Starbug was badly damaged and Lister jettisoned the rear section. As Starbug began to dive-bomb towards the surface of a desert planetoid, Kryten consulted the Starbug Operator's Manual for advice.

From the book, Kryten learned that the 'bug had an emergency parachute. However, the Dwarfers discovered that the parachute had been taken and the Cat had made it into a jacket. Fortunately, Kryten also realised that there was a back-up parachute.

When the 'bug had safely landed, Kryten learned from the manual that the 'bug was a hybrid which could use electricity to power its manoeuvring thrusters and use them to hover. They then used this method to search for wreckage of the Iron Star, and soon after to escape from Rodon by hiding in a sandstorm. (The Promised Land) 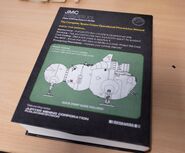