Tongue Tied
Register
Don't have an account?
Sign In
Advertisement
in: Places, The Tank, Red Dwarf Locations,
and 2 more

View source
"Well, if I was an estate agent I'd probably describe it as an old style penal establishment, abundant wildlife, two hundred bedrooms, all with en-suite buckets."
- Holly Watch (Back in the Red, Series VIII)

The Tank is the colloquial term given to a secretive, 400-convict-capacity prison, located on the restricted Floor 13 of the city-sized JMC mining spaceship Red Dwarf.

The Tank is mentioned in numerous series of Red Dwarf, but is only seen in Series VIII. During Series VIII, The Tank is the primary setting with the main characters being imprisoned there after Red Dwarf and its original crew are resurrected by the nanobots.

The Tank is also referred to as The Brig, and Floor 13 or Floor Thirteen.

Although only seen in Series VIII, The Tank is mentioned a few times in other series, when it is always referred to as "The Brig". One example of this is in the Series V episode "The Inquisitor", when Arnold Rimmer suggests locking up Lister and Kryten in The Brig (not recognising them from their timeline-altered own versions, and believing them to be intruders aboard Red Dwarf).

The prison is also referred to as The Brig a few times in Series VIII, as well as The Tank. Captain Hollister always refers to the prison as The Brig, even in Series VIII. This may mean that The Brig was the official Space Corps or JMC designation of the prison. However, Mr Ackerman, the Warden of the prison, always refers to it as The Tank, along with most of the crew (at least the crew who knew of its existence), prisoners and guards.

The prison is also sometimes referred to by its location on Red Dwarf, and therefore known simply as "Floor 13" or "Floor Thirteen". Most of the crew of Red Dwarf were unaware of the existence of a Floor 13, and so this designation for the prison was not used often, except by those directly involved in it.

Before the accident which killed the crew of the Red Dwarf, its parent company the Jupiter Mining Corporation was primarily involved in off-world mining, but it also had secondary and classified contracts for interstellar prison transport. The Tank aboard Red Dwarf was built into the restricted Floor 13 and intended to hold up to 400 of the Galaxy's most hardened criminals originally intended for transport to Adelphi 12. ("Back in the Red I")

Knowledge of the Tank's existence was on a need-to-know-only basis among the crew of Red Dwarf. Only the officers, guards and prisoners know about it (and, according to Holly, anyone who's seen The Twilight Zone). It is not shown on the map of the ship, and not clearly labelled on the elevators, requiring a key to access the button, and as such deemed inescapable (except for Skutters such as Bob who have access through ventilation shafts). ("Back in the Red II")

The guards and inmates of the Tank were resurrected along with the rest of the Red Dwarf crew by the nanobots at the beginning of Series VIII.

The "nice" prisoners are described as having "breath like old nappies, arms like toilet walls, scum of the universe" and the prisoners were described as "people so debauched and unbalanced, they couldn't even get elected as President of the United States". Each cell has a blindfold with "Engaged" written on it for the one not using the toilet. Every prisoner has a code for their meals of the day. Males and females are in separate wings (those without male genitals are put in the women's wing to prevent gender ambiguity, much to the distress of the genital-less Kryten).

G Tower (where the Boys from the Dwarf are held in Series VIII) has guards and staff that are almost as unbalanced as the prisoners (where the therapist and the priest have beaten some of the prisoners). It is rumoured that some prisoners are sent to B Wing for good behaviour. For more serious transgressions within "The Tank", they are sent to "The Hole", which involves being locked up in a very confined space for up to 12 months. One of these victims was "Birdman" and his pet bird Pete, presumably due to some insistence about his pet.

Some of the unnamed inmates were not human but actually droids, such as as Series 3000 mechanoids or Simulants. (Series VIII script book) This is quite obvious with a few of the background extras seen, since they have very un-human looking faces, especially in the scenes in the prisoner assembly area.

The Canaries were a volunteer convict army created to allow the officers to test an environment to check that it is safe and to even eliminate any threats (if not already known) by utilizing the inhabitants of The Tank, which they deemed as expendable. The term comes from old-time mining operations which would send a bird into a mine to make sure the air was safe. They had their own shuttle. Incentives were offered to those who applied. Lister signed most of the prison up, thinking that it was the prison choir, although it is likely some signed up willingly (such as the psychotic Kill Crazy, who would most likely have signed up for fun). It had a cinema that showed movies every Wednesday for those serving in the Canaries, which were terrible movies intended to sap morale (such as the science fiction B-movie, Attack of the Completely Invisible Aliens). It is known that security is lax in the medical area, leading Cat to be able to sneak in dressed as a nurse and Kryten and Kochanski to get in with a blatantly false pretend illness in "Only the Good...".

In a deleted scene, The Tank is described (without the perks that come with joining the Canaries) as having "freezing conditions, no entertainment and lousy lukewarm food".

Cat, Rimmer, Kryten, Lister, Kochanski and Holly are sentenced to The Tank ("Back in the Red III")

The elevator going down...

The assembly area for the prisoners, overhead view

Mr. 'Nicey' Ackerman, the Warden of The Tank, addresses the prisoners

Walkway extends to G-Tower, Lister and Rimmer's new home for the next two years

Baxter and two of his cronies enter the prison canteen 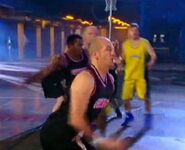 A basketball game in the prison mess hall; guards under the influence of Boing