Write the first section of your page here.

While going through his old crush Kochanski's personal things, Lister finds a photograph of the two of them getting married, and his Best Man. something which never happened in reality or outside of his plan. Later on venturing through a stasis leak, Lister and Cat track Kochanski to a luxury hotel on Ganymede, but Lister is devastated to see the room is a honeymoon suite meaning Kris has just got married. Lister wrongfully assumes the Second man who he had first assumed was the best man in the Photo is actually the Groom. Kochanski then appears and invites them in and Lister discovers... Himself! A future version from 5 years in the future who has found another way to go back in time.It was that Lister who married Kochanski and not the Best Man in the Photo. (RD: Stasis Leak) 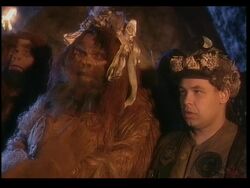 The Dwarfers offered the Kinitawowi many small gifts in trade, but the chief had other ideas. He was willing to give them an OG unit, but only if Lister married his best-looking daughter, Ech-ech-ech-ech-ech-ech-ech-ech.

Lister was far from enthusiastic, describing her as less attractive than his own armpit after twenty games of table tennis. She was an enormous yeti lookalike with warty skin and orange fur. He thought her name sounded like a footballer clearing his nose and claimed that a relationship was impossible because they were both the same star sign - Aries.

Unfortunately, a wedding was the only option. After a short ceremony, Ech-ech-ech-ech-ech-ech-ech-ech picked Lister up like a soft toy and carried him to her hut for their wedding night. After trying to put her off by claiming to be tired, Lister chose to execute Plan B and ran out of the village as fast as he could.